Woes of foreign nurses, caregivers in Japan
11-Aug-2010
Jusuf Anwar, Indonesian ambassador to Japan, has bewailed the overly stringent Japanese national examinations for foreign caregivers and nurses. Out of the 500 Indonesians who took the examinations in 2008 and 2009, only two have passed and have become certified nurses.
Aquino pressed to review Manila-Tokyo trade deal
7-Jun-2010 AllVoices.com
Pamalakaya national chair Fernando Hicap said the review and possible abrogation of the bilateral trade pact between the Philippines and Japan could happen in the first 100 days of the Aquino administration.
Japan hits RP for auto tariffs
20-Apr-2010 Business Mirror
"The [JPEPA] agreement has been signed and only the implementation is not taking place,” said Yasuhiko Arimitsu, president of the Japanese Chamber of Commerce and Industry in the Philippines.
Auto workers slam DTI on JPEPA auto tariff talks delay
30-Nov-2009 Manila Bulletin
A group of 75,000 automotive industry workers has slammed the Philippines Department of Trade and Industry for lack of earnest efforts to negotiate a delay in the tariff elimination of imported vehicles under the signed Japan Philippine Economic Partnership Agreement (JPEPA). 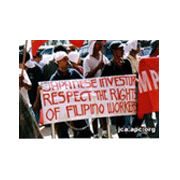 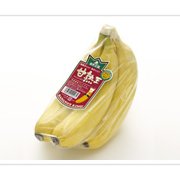 Japan goes gaga over banana diet
8-Sep-2009 Antara
More than 90 percent of Japan’s banana import comes from the Philippines, where Sumitomo Corp. has been operating for 40 years. Sumitomo’s profit quadrupled to Y 1.7 billion in the fiscal year ending March 31, 2009, boosted by the morning banana diet.
Importers using JPEPA to cheat gov’t
11-Aug-2009 PDI
Importers and brokers have resorted to using a controversial trade agreement between the Philippines and Japan to avoid paying the correct amount of taxes to the government, a ranking customs official said Monday.
NGO writes PM Aso to halt Japan biodiesel project
6-Jul-2009 Business Mirror
The public believes that the 600,000 hectare biodiesel deal between the Philippines and Japan is the Jpepa in action, says Pambansang Lakas ng Kilusang Mamamalakaya ng Pilipinas (Pamalakaya)
0 | 10 | 20 | 30 | 40 | 50 | 60 | 70 | 80 | ... | 270