Second largest SAARC partner hungry for Lankan exports, FTA trade
8-Jan-2014
Sri Lanka’s second largest trade partner in SAARC, Pakistan, is hungry for more Lankan exports in the coming year-while also closely looking at Sri Lanka’s sugar sector for entry.
No assurance on MFN from Pak
12-Nov-2013
No assurance was given by the Pakistan government on Tuesday for granting India the Most Favoured Nation trade status, almost a year after it missed the deadline to do so in order to normalise bilateral trading relations.
‘Promotion of SAARC trade top priority’
15-Jul-2013
Promotion of trade among SAARC countries is one of the top priorities of the government, said Federal Minister for Finance Senator Mohammad Ishaq Dar talking to Air Chief Marshal Jayalath Weerakkody High Commissioner of Sri Lanka.
’Pakistan needs to review Pak-India trade pact’
10-May-2013
Chief Executive Officer (CEO) Harvest Tradings Ahmed Jawad has said that to boost the trade with the neighbouring country the government needed to review the Pak-India trade agreement. Talking to INP here on Sunday, Ahmed Jawad said that there was no other option than enhancing trade to normalise the bilateral political and diplomatic relations with India. 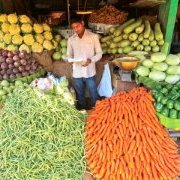 Out of the frying pan...into trade liberalisation: SAFTA a disaster for Pakistan’s agriculture sector
28-Jan-2013 Express Tribune
The South Asia Free Trade Agreement (Safta) appears to be a ‘disaster’ for Pakistan’s agricultural sector and is backed only by the industrial lobby.
MFN status to Pakistan remains fruitless for agri sector: USAID
16-Jan-2013
The Most Favoured Nation status to Pakistan could not prove instrumental in increasing agriculture exports to India, observed a report sponsored by the United States Agency for International Development (USAID).
Pak-India ties to pave way for S Asia Free Trade Zone
13-Jan-2013
There are several safeguarding measures under WTO regime to save industry even after normalisation of trade with India, as delay in this regard will jeopardise the process of liberalisation of trade between the two neighbours.
BD-India bilateral trade up by 20pc
23-Dec-2012
Bilateral trade between Bangladesh and India rose nearly 20 per cent to more than US$ 4.50 billion in the fiscal year (FY) 2011-12 following reduction of sensitive lists by the relevant authorities in both the countries in late 2011.
Duty-free access: Infrastructure hurdles restrict Pak-India trade
23-Dec-2012
Businessmen and traders of Pakistan and India have agreed that infrastructure bottlenecks are hindering the growth in trade relations between the two sides and these should be removed to deepen the ties.
WTO hopes regional integration from Pak-India trade boost
23-Sep-2012
The decision taken by Pakistan and India to scale down tariff to a maximum of 5% and remove all non-tariff barriers (NTBs) by 2020 will lead to regional integration, according to an official of the Geneva-based World Trade Organisation (WTO).
0 | 10 | 20 | 30 | 40 | 50 | 60 | 70 | 80 | ... | 130