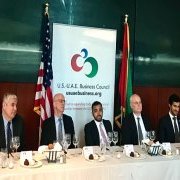 UAE and US to pursue new trade and investment opportunities
22-Jun-2020 The National
The United States and the UAE reaffirmed their intention to pursue new economic, trade, investment and commercial opportunities at their seventh economic policy dialogue.
Sheikha Lubna hopes to sign FTA with US soon
30-Apr-2008
Minister of Foreign Trade Sheikha Lubna Al Qassimi said on Tuesday that she hoped the UAE would soon sign a free trade agreement (FTA) with the US.
Tecom land dispute risks damaging US FTA
20-Apr-2008 Arabian Business
A $1 billion lawsuit between Tecom Investments and a US company could hinder free trade talks between the US and the UAE, a US Congressional document shows.
Emirates persists on US trade agreement
20-Apr-2008 Emirates Business 24/7
The UAE has taken a second route to an FTA with the US after failing to meet the time frame originally established by the Trade Promotion Authority granted by Congress: the Tifa-Plus (Trade and Investment Framework Agreement) process, which provides a framework for further discussions on the FTA and on short-term issues.
US puts UAE free trade deal on ice
24-Dec-2007 Business 24/7
Negotiations for a free trade agreement between the US and the UAE will not be resumed under the current US administration, according to the US Trade Representative office
Free Trade Agreement with the US likely to be delayed further
31-Oct-2007 Zawya
A top United States official on a two-day visit to the UAE has indicated the Free Trade Agreement (FTA) between the two countries is likely to be delayed further.
Blow to UAE-US FTA hopes
1-Jul-2007 Khaleej Times
The June 30 expiration of the Trade Promotion Authority (TPA), which allowed the Bush administration to negotiate trade agreements that cannot be amended by Congress, has shattered all hopes of a revival of the stalled US free trade negotiations with the UAE and other GCC countries.
US, UAE say still hope to reach free trade deal
12-Mar-2007
The United States and the United Arab Emirates still hope to reach a free trade agreement and plan to resume talks whenever the White House wins new "fast-track" trade negotiating authority, officials from both countries said on Monday.
US says FTA with UAE off for now
10-Mar-2007 Gulf Daily News
US trade officials said yesterday they would not finish free trade talks with the UAE by a deadline at the end of this month. Investment is one issue that negotiators have failed to find agreement on.
Envoy says FTA talks to continue
21-Feb-2007 Gulf News
The UAE and the United States have confirmed that the negotiations for a Free Trade Agreement (FTA) will continue, officials said. "The talks are not suspended. What happened is that the documentation will not be ready by the March 31 deadline," US Ambassador Michele J. Sison told Gulf News yesterday.
0 | 10 | 20 | 30 | 40
Subscribe to bilaterals.org weekly