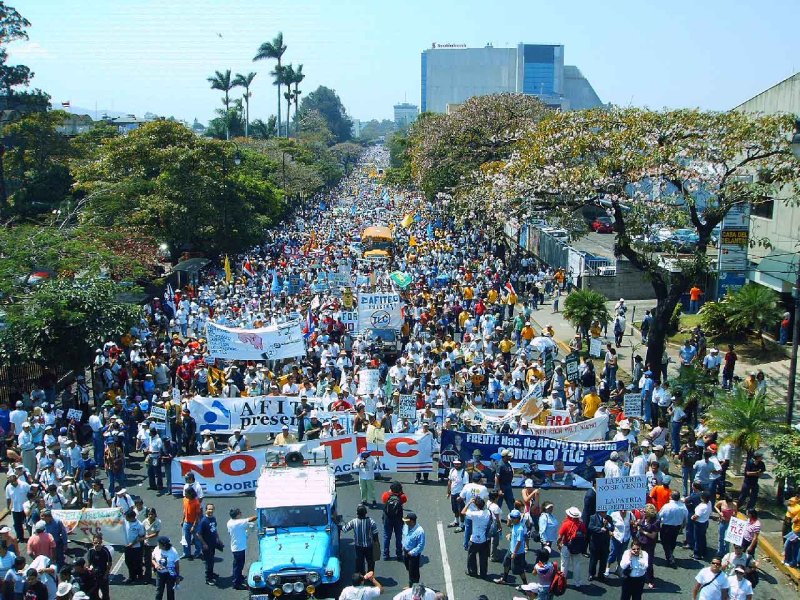 The “patriotic committees” gained notoriety by organizing community groups against the FTA in 2007. (Photo : Carlos Solís)

After 6 years, some continue struggle against FTA with United States

October 14th, 2013 (InsideCostaRica.com) — While their numbers are far fewer these days, the group which emerged as the “Patriotic Committee” nearly six years ago as Costa Rica held a national referendum which ultimately ended with the signing of the Central American Free Trade Agreement (CAFTA) with the United States, continues its struggle against the agreement, known locally as TLC.

On Saturday morning, about 30 demonstrators marched from the Plaza de la Cultura in San José, letting the country know that their opposition to the agreement has not ended.

The “patriotic committees” gained notoriety by organizing community groups against the FTA in 2007. The agreement, however, ultimately was approved by a slight majority in a national referendum on October 7th of that year.

Since that time, opponents of the agreement have taken to the streets each October to show their opposition to the FTA.

Organizer Emilia Sibaja said that since the approval of CAFTA, the country has lost quality of life and witnessed increased unemployment and poverty as a result.

The Patriotic Committee says it maintains no affiliations with any of the country’s political parties.

“We’re telling [people] to resist neoliberal policies and organize themselves in order to have a more fraternal and pluralistic society. But we’re not telling people to vote for one [candidate] or the other,” Sibaja said, adding that the FTA has “impoverished Latin American countries.”