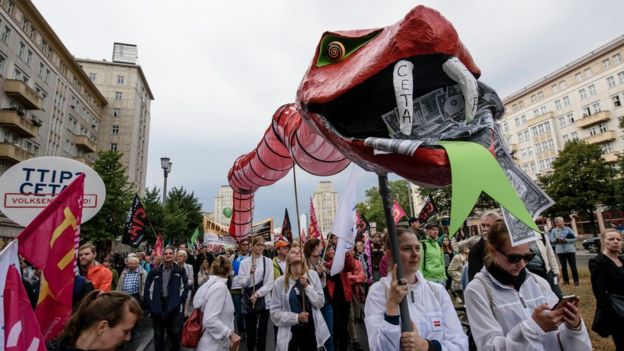 Since the moment she arrived in Downing Street, Theresa May has promised to build a country that works for everyone, not just for the privileged few. But she’s pursuing a Brexit deal that will achieve the exact opposite – undermining working people’s rights, jobs and livelihoods.

Negotiations are finally moving to the next stage, but the direction of travel is extremely worrying. Michel Barnier says that the government’s self-defeating red lines mean that a Canada-style free trade agreement is the only option on offer.

That would be a dreadful deal for working people. Trade unions campaigned against the EU and Canada’s CETA deal because, although it offers lots of protections to foreign investors, it does nowhere near enough to protect workers’ rights and public services.

It’s also a bad fit for Britain, since it removes tariffs on most goods but not barriers to trade in services. This is clearly the wrong option for an economy where most people work in the services sector.

Of course, we now know that the government developed its strategy without regard for the evidence. David Davis has confirmed that he’s failed to carry out an impact assessment, which means he’s going into the most important negotiations in a generation blindfolded.

At the TUC, we’ve set clear tests for the Brexit deal and tested all the available options against them. We’ve said that any deal must protect jobs, living standards and rights, as well as allowing citizens to enforce our consumer, environmental and workplace rights. It should also give workers a say by involving unions, and it should protect the Good Friday Agreement.

A Canadian-style deal would fail all those tests. In particular, if it doesn’t include protections for workers rights – which CETA doesn’t – then British workers risk falling behind their counterparts in Europe on things like parental leave, working time, health and safety and paid holidays.

Ultimately, we’ve concluded that the only option that guarantees a level playing field on workers’ rights is staying in the single market and customs union. This model would also pass the rest of our tests, beating all the others hands-down. While the single market isn’t perfect, and we’re ready to consider alternatives, it’s where the evidence points us.

So taking the single market and customs union off the table before negotiations had even begun was a catastrophic error by the government. Now, their refusal to admit the mistake is clearly getting in the way of negotiations, as last week’s chaos over the status of Northern Ireland showed.

And as people with real experience of negotiations have repeatedly emphasised, things are only going to get harder when trade talks begin.

So in the new year, we need a sea-change in the government’s approach to negotiations. Ministers must put pragmatism before ideology and put the single market and customs union back on the table.

It’s hard to admit you got it wrong. But if the prime minister wants to prove her concern for ordinary working people, then frankly she has no other option. Her reckless red lines have to go.

Frances O’Grady is general secretary of the TUC