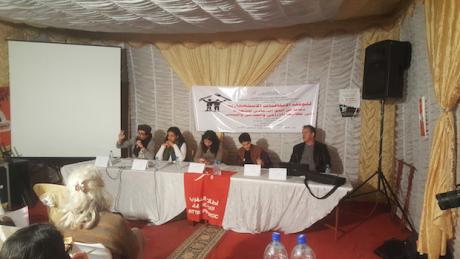 A declaration from North Africa: food sovereignty is a right

On December 15, 16 and 17, 2017, ATTAC Morocco, a member of the global network for the abolition of illegitimate debts (CADTM), organised a Maghreb seminar on free trade agreements, agriculture and food sovereignty under the slogan: No to colonial agreements, for the defence of people’s sovereign right on their agricultural, food and environmental systems. The seminar was held in Agadir, Morocco with the participation of activists coming from Egypt, Tunisia, Algeria and Morocco.

The seminar comes a few days after the end of the 11th Ministerial Summit of the World Trade Organization (WTO), which hasn’t reached any official agreement. This failure reflects the difficulties of imperialist powers such as the United States (US) and the European Union (EU) in making progress in multilateral agreements, pushing them instead to promote bilateral and regional preferential trade agreements, which maintains a suffocating control over dependent and semi-autonomous colonial states. These trade agreements have deepened the control of multinational companies on agriculture and maritime fishing, exacerbated food speculation, and destroyed subsistence agricultural and fishing systems. Moreover, they accelerated the unlimited quest for the promotion of genetically modified seeds and the generalisation of the export-oriented agriculture and fishing industry. In the global south, International Financial Institutions (IFIs) are pursuing neoliberal policies that further deregulate, open borders to the invasion of foreign capital and subsidised products and ensure the transfer of profits and wealth. These neoliberal dictates are leading to an increase in public debt at the expense of the popular classes who shoulder the burden of austerity policies.

We have come together in this 3-day conference to affirm our support for people’s food sovereignty and their right to determine their own food system, a system that ensures the production of healthy food in sufficient quantity while protecting nature and remaining in harmony with it. This system must give priority to the development of local staple foods, shall protect natural seeds and their supply and must implement a popular agrarian reform. The necessary resources for this purpose must be provided through the suspension of debt service payments and through the cancellation of illegitimate public debts.

We stand against the plunder of peoples’ agricultural and fishing resources by multinationals and financial capital and we are equally opposed to all forms of discrimination and racism. We strive to achieve food sovereignty, climate and environmental justice and we will fight for the establishment of a new society where all kinds of exploitation and oppression have been brought to an end, a truly humane society that satisfies people’s needs in a participatory and democratic framework while staying in harmony with nature.

This seminar allowed us to continue our analysis and discussion for an action-oriented understanding: we are planning on organising campaigns of denunciation, raising awareness and initiatives in order to encourage common struggles and establish forms of coordination and solidarity with movements sharing the same objectives.

We, participants, activists from militant organisations in Algeria, Tunisia, Egypt and Morocco, affirm:

That the so called ‘free trade’ agreements, signed by the governments of our countries are new colonial agreements that serve the interests of multinationals, favouring the pillage of lands, indigenous peoples’ communal areas, their water resources, their fish and their food. This results in the destruction of environments and cultures, all in the name of accumulating more profits for foreign and domestic capitalists. Together with the debt system, these agreements constitute the two faces of the imperialist domination of people.

Our support to the struggles of peasants and small fishermen in Tunisia, Egypt, Algeria, Morocco and other countries against the expropriation of agricultural land and their transfer to the corporate and real estate speculators, which threaten the livelihoods of thousands of farmers and agricultural workers.

Our absolute rejection of all capitalist ‘alternatives’ in the fields of agriculture and fisheries, which are technology intensive and hence, deplete resources and energy, destroy biodiversity, pollute the environment and negatively impact our health.

We are convinced that the peoples’ food sovereignty is closely linked to their right to self-determination at the political, economic, social, cultural and environmental level. It is equally linked to a rupture with the imperialist centres and international financial and commercial institutions, and also to the struggle against regimes and governments that implement these policies in favour of global and domestic capital.

Food sovereignty is the antithesis of the productivist capitalist food system, which is responsible for the destruction of natural resources and a climate chaos that threatens the lives of millions of people. It is peasant agriculture and subsistence fishing that feed humanity and preserve the environment, rather than the intensive, industrial, commercial and chemical agriculture promoted by capitalism.

This is why we call for:

The collective struggle against free trade agreements, fisheries agreements and the World Trade Organization, as well as against the International Monetary Fund and the World Bank, which enslave people through the debt system.

The criminalisation of all multinational corporations and local capitalist companies that aim to commodify people’s food and destroy the environment in order to accumulate more profits.

The initiation and promotion of experiments in popular farming systems that aim at breaking free from food dependence.

Strengthening the cooperation and struggle at the national, regional, continental, southern and international levels between organisations and networks fighting for food sovereignty in order to develop their activities and mobilisations.

Broadening international solidarity in order to stop the growing repression against popular mobilizations (peasants, fishermen, indigenous, and agricultural workers, etc.) and to organize and protect their lives, their lands, their environment and their food traditions.

Strengthening support for the resistance of the Palestinian people against the US imperialist decision to deprive them of their historic rights.

Join the international solidarity movement with hundreds of families expelled from their territories in the province of Maraba, Brazil, and with the movement of landless peasants who resist these forced evictions.