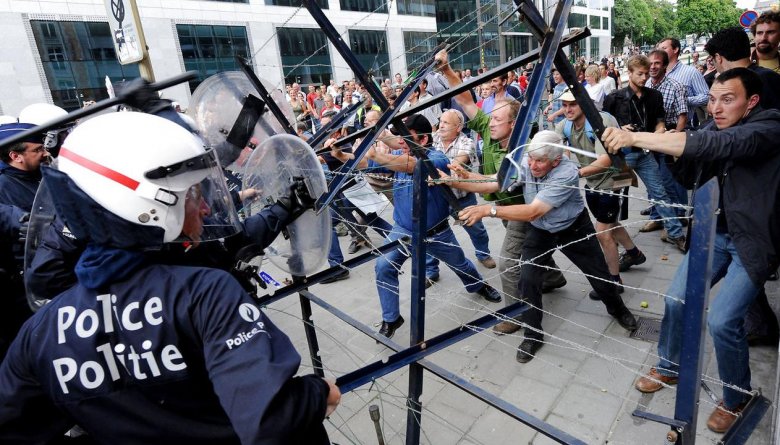 In the midst of the secret negotiation on the Transatlantic Free Trade Agreement with the United States, the European Union is slowly yet clearly revealing itself as a political instrument of American domination. The European Union’s contempt for democratic processes is desperately being hidden behind the mask of peace between the nations, the mask of the 2012 Nobel Peace Prize recipient that unselfishly tries to save Europe from its own demons, presenting itself as the only dam holding Europe together peacefully.

“From War to Peace: a European Tale” was the title of Barroso and Rompuy’s lecture in Oslo in 2012. Well, just like good images, when a title is well chosen words are superfluous…

…and like any propagandistic narrative, it only works when repeated ad nauseam and taken at face value by the docile media. However, it hardly stands the test of critical examination.

Throwing a Stone in the Pond

Indeed, the idea of the EU being responsible for peace in postwar Europe is one colossal claim – yet one that each pupil in school, whether in Spain, France or Germany repeats over and over, one that has long replaced the morning prayer of once-christian schools. Once adulthood is reached, the same gospel is then passed on through the media, the political class and even culture itself, becoming our daily bread… and not a soul to challenge it.

In fact, when criticism is raised about the vicious attack on the European social model by the EU Treaties and its executive body the Commission, one is sooner than later in the conversation accused of cheering for WWIII. Equating the EU with peace indeed acts as an intellectual stun gun, depriving of anyone who wishes to draw a dissident point of view of its most fundamental right to express it.

However, any dictatorial regime can claim that it is acting for peace and harmony. In fact, if history teaches us anything is that this is a common theme in the history of repressive regimes and especially empires. Adolf Hitler claimed to want peace in Europe when reaching power in the early thirties. The Soviet Union claimed to want peace in each of their military foreign incursions. Obviously in the end facts prevailed above words and no historian in his right mind would ever treat Brezhnev, Hitler or Julius Cesar as ambassadors of peace based solely on their political discourse. The European Union should not be any exception in this regard.

What was the reason for the uprising in East Berlin in 1953 not turning into a global conflict, given the alliances game in place at the time? The EU only exists since 1957 (then called the EEC). That can hardly be attributed to Barroso’s predecessors, in spite of his extravagant claims. Same goes with 1956 Budapest uprising. In fact, there are plentiful examples that show in most cases such anachronisms on the EU’s role in world peace; in other events taking place after 1957, like the Russian intervention in Prague in 1968, one would be hard put to draw the link between a world conflict being prevented between the East and the West and the price-control for dairy produce (the EEC then in its early phase with only six countries and dealing mainly around agricultural policies).

As Noam Chomsky has pointed out on several occasions, the reason behind Europe’s peace since the end of WWII is the assuredness that another war would be the final one for European nations and possibly also for the human race. The reason for this is simple: the existence of two blocs, NATO on the one hand and the Warsaw alliance on the other, both armed with enough nuclear arsenal to end civilization.

The EU in its modern and more achieved form actually exists since 1992 and can therefore not be attributed 70 years of European peace. Just like the rooster singing in the morning doesn’t have the power to raise the sun, the EU had no effect on world peace. In fact, it could even be argued that the EU’s alignment with US foreign policy — closer today than ever — should be awarded, if anything, by a Nobel “Razzie”.

At Peace with Whom?

In his August 2013 article in Le Monde Diplomatique, the President of Bolivia Evo Morales expressed his outrage regarding the EU’s subservience towards the U.S. (his presidential plane was grounded for several hours against international law by European authorities suspected to follow orders from Washington, in the midst of the Snowden affair). He wrote: “To them (Europeans), the democratic and revolutionary process in which all Indians are engaged represent an obstacle on the path to civilization. This racism is now taking refuge in arrogance and the most ridiculous ‘technical’ explanations to hide a political decision made in an office in Washington.”

Indeed, the European Union might be at peace with itself, in a very far fetched sort of way, however what would Libyans have to say on the matter? Is the European Union also at peace with the Middle East? With Syria? With Iraq? When France turns its back on its longtime business partner Iran, even scarifying one of its most prestigious automobile manufacturers, whose interests are they defending? Are they promoting peace? When Spain treats Venezuela like a rogue State or even violates international law in the forementioned case of Bolivia, is it helping Spanish interests or even Spanish businesses?

Huntington’s disease is a neurodegenerative disorder that slowly paralyses every muscle in the body until the patient dies. However, in world affairs, the same name is more famous for being the author behind the “Clash of Civilizations” (1993). Definitely a different type of illness yet with very similar results.

Samuel P. Huntington (1927-2008) was the Harvard Professor that outlined in the forementioned book what the world would look like after the Cold War. However, it is often interpreted as the roadmap that the US is imposing as far as its influence reaches. It “predicts” a world in which people’s cultural and religious identities would be the primary sources of conflict. The actual map that Huntington published is in fact more often than not a faithful guide to current and future economic and military alliances, regardless of the silliness of the author’s criteria for defining such “blocs.”

The so-called “people’s cultural and religious identities” that define given blocs barely hide in fact a modern form of white supremacism. Behind Huntington’s theory, one can not ignore the only constant feature defining the contours of these blocs (and of today’s EU): the color of the skin.

With the signing of the secret TAFTA agreements, the 28 members (and growing) of the EU might very well be embarking on a cruise that would seal the fate of Europe as we know it, or at least for what Morales wants to remember it: “Europe has given birth to the most noble of ideas: liberty, equality, fraternity. It also has for the most part contributed to progress of science and to the emergence of democracy. It is now nothing more than a pale figure of itself (…)”.