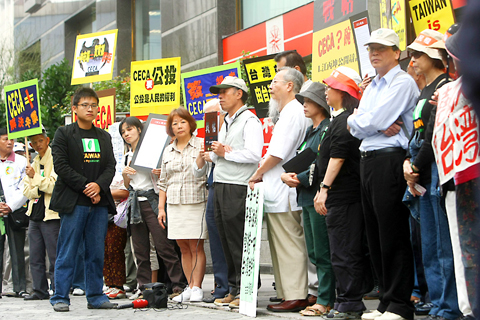 Taiwan Referendum Alliance members protest outside the Straits Exchange Foundation’s headquarters in Taipei yesterday against government plans to sign a comprehensive economic cooperation agreement with China. They said a national referendum should be held on the proposed pact. (Photo: CNA)

The Alliance of Referendum for Taiwan demanded yesterday that Straits Exchange Foundation Chairman Chiang Pin-kung (江丙坤) participate in a public debate on the government’s plan to sign a comprehensive economic cooperation agreement (CECA) with China.

More than 40 alliance members made the call during a demonstration in front of the foundation’s Taipei headquarters to protest against the proposed CECA and to urge the government to hold a referendum on the issue.

Alliance representative Tsay Ting-kuei (蔡丁貴) said that if Taiwan signs a CECA under the “one China” principle, the agreement would symbolize Taiwan’s surrender to China.

“The signing of such an agreement will be an act of betrayal of the Taiwanese people,” he said, adding that the CECA would compromise Taiwan’s sovereignty and jeopardize its economic and political interests.

The public should decide by national referendum whether or not the government should sign a CECA with China, he said.

“The Straits Exchange Foundation and other government agencies have no right to make that decision without public consensus,” Tsai said. “If Chiang has the determination and courage to sign a CECA with China, then he should have the courage to participate in a public debate on the issue.”

A foundation official came out of the building to accept a written petition from the demonstrators.

The DPP insists Taiwan should sign a free-trade agreement (FTA) with major economies, not an economic cooperation pact with China, Chuang said.

A referendum is needed before the KMT government negotiates with China on the agreement, he said.

Meanwhile, Presidential Office Spokesman Wang Yu-chi (王郁琦) said yesterday that government agencies had agreed to refer to the proposed pact only by its full Chinese name, instead of the acronym CECA to avoid misunderstandings over the English name of the proposed deal.

The Ministry of Foreign Affairs, however, said that when its officials speak to foreign dignitaries about the proposed agreement, they will use the agreement’s full English name, or whatever language is spoken by the dignitaries.