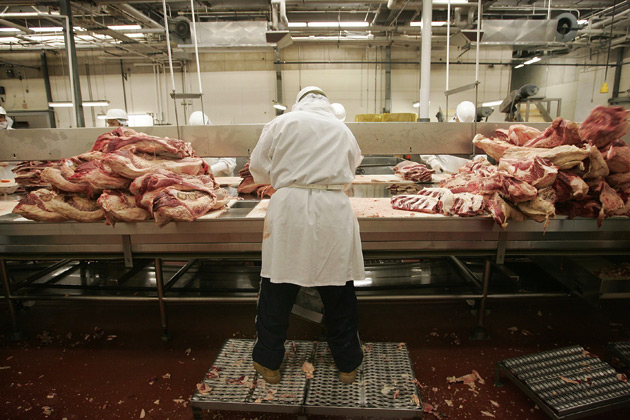 As Congress and the public debate the pros and cons of the United States-Mexico-Canada Agreement (USMCA), or New NAFTA, behind the scenes and in the shadows transnational corporations are doubling down on their plans to weaken and eliminate public protections through a related entity, the secretive Regulatory Cooperation Council (RCC). This little-known council has the mission of promoting trade by “reducing, eliminating or preventing unnecessary regulatory differences” between Canada and the United States. Since the RCC’s inception, agribusiness—including factory-farmed livestock producers, the feed industry, and chemical and pesticide manufacturers and linked transportation businesses—has had a seat at the regulatory cooperation table. Their focus, without exception, has been advocating the scaling back and even elimination of important safety protections in both countries. In the U.S., recommendations made by the RCC feed directly into regulations enacted (or eliminated) by the Department of Agriculture, Food and Drug Administration and Environmental Protection Agency, among others.

Cross-border regulatory cooperation activities aimed at eliminating so-called “non-tariff barriers” to trade—standards that can increase the cost of importing products that don’t meet another country’s health and safety protections, or prevent the import altogether—began following the signing of the original NAFTA. Initially, informal working groups were established to harmonize pesticide and other regulations. The RCC was formally created in 2011 by an Executive Order from President Obama, and proceeded to establish work plans to harmonize U.S. and Canadian regulations in 23 policy areas, including meat and plant inspections, food safety, workplace chemicals, chemicals management, rail safety and transport of dangerous goods. The RCC was revitalized in June 2017 by the Trump and Trudeau administrations with a new Memorandum of Understanding.

The Trump administration recently sought comment from “stakeholders” on what the RCC’s activities and focus should be going forward. It is very clear that the administration’s RCC initiative is part of its broader deregulatory plan. The U.S. request for comment specifically states that international regulatory cooperation initiatives “may serve deregulatory functions and help agencies achieve the objectives of Executive Order 13771.” This executive order “requires that, for each fiscal year, agencies must identify in their Regulatory Plans offsetting regulations for each regulation that increases incremental cost” and at a minimum, must repeal two regulations for every one that is adopted. The Trump government intends for the RCC process to promote these regulatory rollbacks.

Predictably, the RCC stakeholder submissions were mostly from transnational corporations and industry associations. Most of the public, as well as many food, consumer and environmental groups, have never heard of the RCC. (IATP’s comments were among very few from civil society.) The corporate commenters have a consistent message, which mirrors that of the Trump administration : Use the RCC to get rid of regulations. Many also see the RCC as a mechanism for implementing new restrictions on public protections that are part of the New NAFTA. Here are some of the most egregious industry asks :

It is very clear that the Regulatory Cooperation Council, and related language in the new NAFTA, is part of a broader deregulatory plan. New NAFTA hasn’t yet been sent to Congress for ratification and isn’t in effect, but that hasn’t stopped industry lobbying groups from trying to use it to deregulate. Several comments submitted by industry groups made the case that provisions in New NAFTA should be implemented through the RCC, or that a domestic regulation they object to violates provisions in the deal. As we discuss above, in their objections to Canada’s new junk food labeling rule, the meat industry claims the rule is inconsistent with New NAFTA’s “Good Regulatory Practices” (GRP) chapter. The GRP chapter includes provisions defining what information and studies may be used to develop domestic regulations, how other countries should be involved in the rule-making process, and procedures for adopting, reviewing and repealing regulations. It also includes many provisions promoting regulatory cooperation and harmonization. Other New NAFTA chapters, including provisions on technical rules including labeling, also encourage or require regulatory cooperation prior to adoption of new mandatory public protections.

While different regulations in the two countries could be harmonized to the most protective of the divergent standards, that approach is not reflected in any of these recent industry demands. Nor is it what actually happened during the decade since the RCC was established. Perhaps there is no more devastating and obvious proof of this than U.S. and Canadian regulators’ actions both before and after the 2013 Lac Mégantic train disaster.

From the early days of the RCC, it was a forum for regulators to seek to harmonize regulations governing rail safety and the transport of dangerous goods, including policies regulating the rail transport of volatile crude from North Dakota’s Bakken formation and Alberta’s oil sands through Canada and the U.S. We know now that these regulatory cooperation initiatives did nothing to improve rail safety, either before or after a 72-car runaway oil train crashed and exploded like a bomb in the Quebec village of Lac Mégantic, directly killing 47, destroying the community’s historic center, and spilling thousands of gallons of crude oil on the edge of what had been a pristine lake and tourist destination.

The disaster was caused by reckless industry cost-cutting, abetted by massive regulatory failure as the Canadian government pursued a single-minded focus on deregulation. This deregulatory agenda has many parallels with what’s going on now under the Trump administration, including the arbitrary and foolish 2-for-1 policy that requires repealing two existing regulations for every new rule. Transport of dangerous goods and rail safety continue to be part of the RCC’s mission. It’s hard to see how secretive discussions aimed at eliminating regulatory differences that impede free trade will improve safety, especially with the Trump administration busy rolling back many measures intended to address some of the biggest safety gaps that led to the Lac Mégantic disaster. As Bruce Campbell’s book on Lac Mégantic details, these rollbacks include delaying or completely stopping :

The current RCC agenda, added to New NAFTA’s “Good Regulatory Practices,” points to a concerted effort by corporations and their allies in government to lower standards in North America and beyond. Neither the Canadian nor U.S. government seems likely to use the RCC to harmonize rules upwards. Obviously, when at least one of the two countries seeking to harmonize regulations across the border is hell-bent on rescinding public protections, harmonization will lead to lower standards. Protective standards and oversight are already deficient in both countries—from meat inspection and food safety, to protecting workers and the public from exploding grain elevators and exploding oil trains. Without the will to hold industry accountable and adopt strict protections, regulatory cooperation in and of itself does nothing to improve those standards. In fact, as the rail safety example illustrates, the RCC experience even under the more regulation-friendly Obama administration failed the public interest. Indeed, just this month there was another major derailment which killed the crew as a freight train plunged 60 meters off a bridge near the British Columbia-Alberta border.

For hyperlinks read the article on the original page