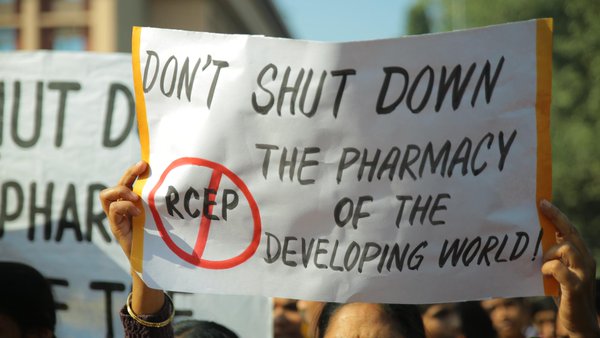 95 health, community and development organisations in the Asia Pacific region call on trade ministers to reject provisions that would negatively affect access to generic medicines in the Regional Comprehensive Economic Partnership agreement

The RCEP includes an intellectual property (IP) chapter with measures that threaten access to life saving essential medicines. Even though it does not include the United States, many of the provisions appear to have been borrowed from the US-Korea free trade agreement and the Trans Pacific Partnership agreement. In April 2016, a leaked IP chapter (dated October 2015) verified that South Korea and Japan were pushing for data exclusivity, a measure that could delay regulatory approval for medicines that are off patent, and provisions that will lengthen medicine patent monopoly periods. This will only serve to delay the market entry of affordable generic medicines and goes well beyond the intellectual property protections required by the World Trade Organization (WTO) Agreement on Trade-Related Aspects of Intellectual Property Rights (TRIPS).

This chapter is of particular concern as India’s IP laws attempt to strike a fair balance between the rights of the patent holders and the need to provide affordable medicines to its citizens and people in the developing world. India is the world’s largest producer of generic medicines and supplies more than 80% of generic anti-retro viral (ARV) medicine to treat HIV in low and middle income (LMIC) countries. Its generic medicine industry has reduced the cost of ARV medicines over time by up to 98%, vastly increasingly access to medicines for those most in need. If India is forced to sign onto TRIPS plus measures, access to affordable generics of new essential medicines for a number of diseases for the world’s poorest people in Sub Saharan Africa and other low and middle income countries will be seriously compromised. For example Malaysia provides Indian generic ARVs free of charge to their HIV positive population. It is highly unlikely that Malaysia could afford to sustain their HIV treatment program if they are unable to access Indian generics. RCEP also includes several LMIC that have large populations and economic pressures to ensure affordable access to medicines, such as Indonesia, the Philippines, Thailand, China and Vietnam. Least developed country (LDC) members Laos, Cambodia, and Myanmar are struggling to provide affordable access to medicines and have an extension in the WTO on pharmaceutical IP protection until 2033 (and are eligible to extend this period for as long as they are LDCs).

UNAIDS reports that only a third of the people in the Asia and Pacific region who need HIV treatment currently have access. If RCEP countries agree to elevated IP protection in RCEP, this figure could likely increase.

There is no justification for an intellectual property chapter in regional trade agreements such as the RCEP. We call on all negotiating governments to reject all TRIPS plus measures in the RCEP. In particular we call upon wealthier countries such as South Korea, Japan, Australia and New Zealand to resist pressing for IP provisions that threaten access to medicines for the world’s poor.