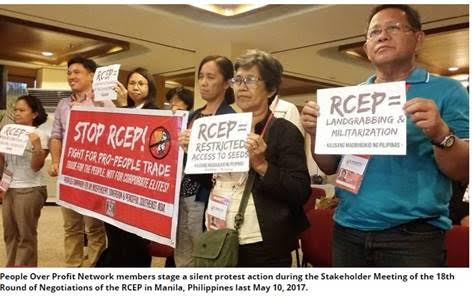 APC members protest during the 18th Round of RCEP negotiations

The members of the Asian Peasant Coalition (APC) such as the Kilusang Magbubukid ng Pilipinas (KMP), National Federation of Peasant Women (AMIHAN) and the National Federation of Small Fisherfolks of the Philippines (PAMALAKAYA) joined the silent protest action led by the People Over Profit Network on May 10. The protest was during the Stakeholders Meeting of the 18th Round of negotiations of the Regional Comprehensive Economic Partnership (RCEP) in Manila Philippines demanding to stop the negotiations.

"Once enforced, RCEP will allow the entry of more foreign investments and greater foreign ownership of our lands. To Filipino farmers, this means more land grabbing, increase poverty and hunger incidence, and intensified militarization. At present, around 500,000 hectares of land (equivalent to 12% of agricultural land) in Mindanao are being covered with plantation crops primarily for the export market. Foreign plunder continues to result in dispossession and displacement of numerous Lumad, Moro and peasant communities," the KMP said.