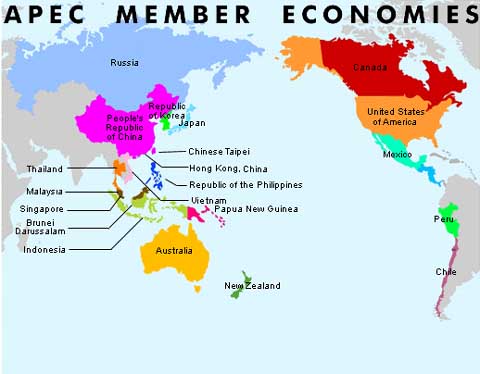 APEC to refer to Pacific FTA as pathway to free trade area : draft

TOKYO, Nov. 3, (Kyodo) — The Asia-Pacific Economic Cooperation forum will refer to a U.S.-backed multilateral trans-Pacific free trade agreement as one of the "pathways" to achieve a region-wide free trade area, an outline of a draft of the leaders’ declaration showed Wednesday.

At the annual APEC summit meeting in Yokohama on Nov. 13 and 14, the 21-member forum is planning to specify for the first time in its declaration the possible efforts to realize the long-term goal of creating a Free Trade Area of the Asia Pacific.

The draft, obtained by (Kyodo) — News, says APEC should take a step toward realizing the FTAAP, and that one of the two pathways to realize it is to promote a comprehensive free trade agreement based on efforts by regional frameworks such as the "ASEAN plus three," the "ASEAN plus six" and the Trans-Pacific Partnership agreement.

The ASEAN plus three groups Japan, China, South Korea and the 10-member Association of Southeast Asian Nations, while the ASEAN plus six adds Australia, India and New Zealand to the 13 countries.

Another pathway is to accelerate efforts for regional economic integration in certain areas such as investment and services, the draft says.

The draft also says APEC should serve as an "incubator" to realize the FTAAP.

Japan is currently considering joining the negotiations for the TPP. The TPP originated in a free trade agreement between Brunei, Chile, New Zealand and Singapore, and negotiations are under way to expand it with another five APEC countries, including major agricultural exporters such as the United States and Australia.

But as members are expected to be required in principle to reduce all tariffs to zero, there are concerns in Japan that farmers may suffer if Tokyo joins the TPP because of an expected influx of cheaper agricultural products.

Meanwhile, the draft outline does not include any specific timeline to create the FTAAP.

Japan assumed the rotating chair of APEC this year, following 1995. A series of ministerial meetings will culminate in the summit in Yokohama at which the joint declaration will be issued.

APEC, which accounts for more than half of the world’s economic output and 44 percent of global trade by value, also includes among its members Peru, Russia, Taiwan and seven ASEAN members.