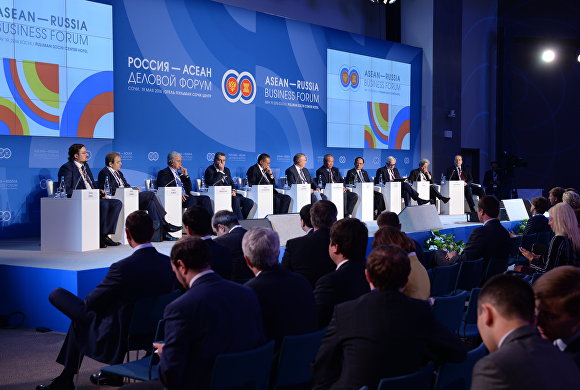 "The Eurasian Economic Union has experience in creating a common market and I would like to point out that the Union is open to cooperation with all interested partners," Medvedev said at the 14th East Asia Summit in Bangkok.

"We welcome the interest that Brunei, Indonesia, Cambodia, Thailand and the Philippines have shown," he added.

He noted that free trade agreements had already been signed with Vietnam, Singapore, and China while talks are underway with India.

Medvedev emphasized the need to combine the potential of the Association of Southeast Asian Nations, EAEU countries and the Shanghai Cooperation Organization (SCO).

He said the 2016 Russia-ASEAN Summit had supported the idea of establishing a broad Eurasian partnership.

"Unfortunately, the use of sanctions is increasing, they have become a tool of political pressure and unfair competition," he said.

According to Medvedev, the protectionist sentiment is growing stronger in a number of countries "which leads to specific political and legal decisions".

"They result in large-scale trade wars," he added.

He said Asian countries are beginning to realize that there is a need to search for new methods of constructive interaction instead of establishing blocs and unions that oppose each other.

"The current situation in relations between the countries of the region and Asian countries’ determination to create an open and non-discriminatory market environment are proof of that," Medvedev said.