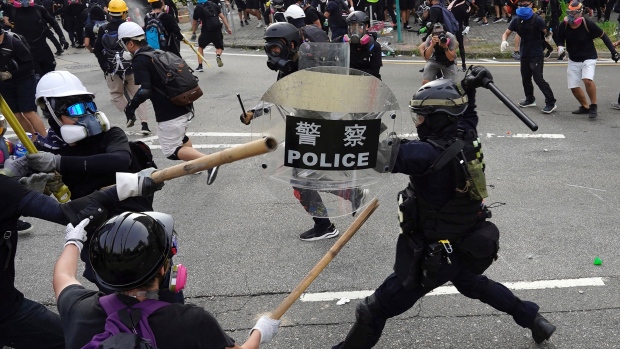 The peak union body has urged the Morrison government to delay ratifying a free trade deal with Hong Kong amid human rights abuses and a violent crackdown on pro-democracy protesters.

A joint federal parliamentary committee has been examining the merits of free trade deals Australia has signed with Hong Kong and Indonesia, at hearings across the country this week.

“It is important that Australia treads cautiously with regard to an agreement with a territory that is experiencing significant political upheaval and instability,” O’Neil said.

“Given the escalating events taking place in Hong Kong, the ACTU calls on the government to delay the enabling legislation of the Australia-Hong Kong free trade agreement.”

Birmingham said it would be “foolish” to delay the swift implementation of the agreement.

“Our government continues to urge all parties to work together to resolve these matters peacefully,” he told the Guardian.

“Australia places great value on the economic freedoms and degree of autonomy that Hong Kong has under the ‘one country two systems’ framework, and this free trade deal which our two governments have negotiated reaffirms those opportunities for trade and investment to flow into the future.”

In 2015, the federal government won an international legal battle to uphold its world-leading tobacco control measures, with Philip Morris failing in its long-running attempt to challenge plain packaging laws under a 1993 bilateral trade agreement with Hong Kong. It cost Australian taxpayers close to $40m to defend the case.

Labor’s trade spokeswoman, Madeleine King, declined to back the ACTU’s call, saying she was reluctant to pre-empt the parliamentary process and consultation with her Labor caucus colleagues.

She said Labor is concerned about the situation in Hong Kong and noted people have a right to protest peacefully.

“We urge all parties to find a peaceful resolution that is consistent with the ‘one country, two systems’ arrangement,” King said.

“The best support for Hong Kong and its citizens at the current time is finding ways to assist with its development at a time when its economy is under increasing stress,” he said.

“Pulling this opportunity off the table now would send a terrible signal to Hong Kong and those who drive and benefit from its economy.”

The protests on the streets of Hong Kong began over a proposed extradition bill with mainland China but have morphed into a wider pro-democracy movement.

For the past three months the rolling protests have regularly brought millions of people out onto the streets and on occasions the demonstrations have turned violent.

Hong Kong police say they arrested dozens of people, including a 12-year-old child, over the weekend, as they defended firing a live round for the first time since the demonstrations started in June.