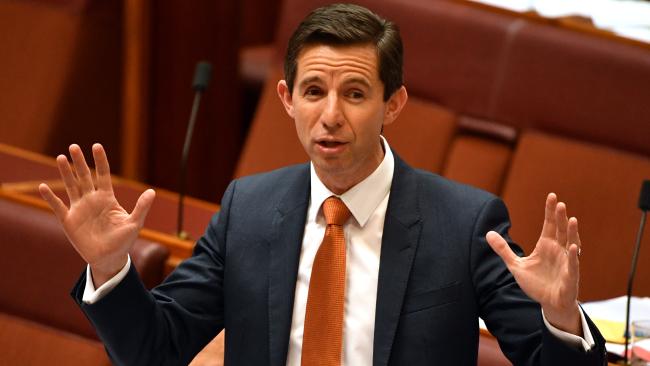 The Morrison government will send its first minister to Beijing since the federal election to put pressure on China and India to finalise an EU-style trade deal, as it runs out of time to finish the world’s largest free trade agreement by its Christmas deadline.

Trade Minister Simon Birmingham will hold high-level talks with his Chinese and Indian counterparts from Thursday in a bid to break down Indian resistance to removing agricultural tariffs.

"This agreement is an opportunity to create not just a regional trade agreement but a regional economic bloc for ongoing cooperation," Senator Birmingham said.

"From our perspective having that asian economic bloc encompassing the giants of China and India the traditional partners in Japan, South Korea and New Zealand and then the real emerging tigers of the ASEAN economy is exciting."

He will tell Indian trade representatives that China’s removal of trade barriers has been the reason for its economic success and it was time India did the same.

Following secretive trade meetings in Melbourne in June, the negotiations will ramp up as pressure mounts on getting the deal done to buttress against any further fallout in the $US250 billion ($360 billion) US-China trade war. The deal will not include the US, which has grown increasingly protectionist under President Donald Trump.

"We will need every minute and every day to conclude negotiations," Senator Birmingham said in an interview in Canberra on Wednesday.

In unusually direct comments to his Indian counterpart, Senator Birmingham said "India has resisted some of the approach to reform," allowing itself to lag behind China’s "economic miracles".

Despite being Australia’s fourth largest trading partner India is the only country out of 15 in the proposed RCEP which Australia does not already have a bilateral free-trade agreement with.

The negotiations will centre on reducing India’s tariffs on agriculture, resources, manufacturing and technology sector - allowing Australian firms greater entry into the country of more than 1.3 billion people.

The country’s farming and manufacturing lobbies have strongly resisted attempts to remove tariffs for decades, citing the impact on hundreds of millions of poorer workers.

"That is an enormous opportunity for Australia and for the other nations including India to be able to secure greater productivity and more efficient production," said Senator Birmingham.

But the Trade Minister ruled out any further work rights for Indian or Chinese workers to migrate to Australia.

"Fears that there are going to be some new opening of work rights are unfounded," he said.

Senator Birmingham said he was "very pleased China was hosting this round," but would not comment on whether his visit was a sign of warming relations between the countries after years of political strain.

"I don’t think it is helpful when ministers try and comment on the nature of the relationship," he said.

"If we can conclude RCEP by the end of this year we will not only strengthen our economy but show to the rest of the world - including those who criticise trade agreements - that we won’t be deterred and we are going to keep growing trade co-operation and liberalisation."

A coalition of 52 groups, including the Australian Council of Trade Unions, Missionaries of the Sacred Heart, Greenpeace and the Public Health Association, wrote to Senator Birmingham in June urging him to release details of the highly guarded deal.

They have raised concerns the deal will allow international corporations to sue governments over domestic laws, weaken the Pharmaceutical Benefits Scheme and increase the number of temporary workers.