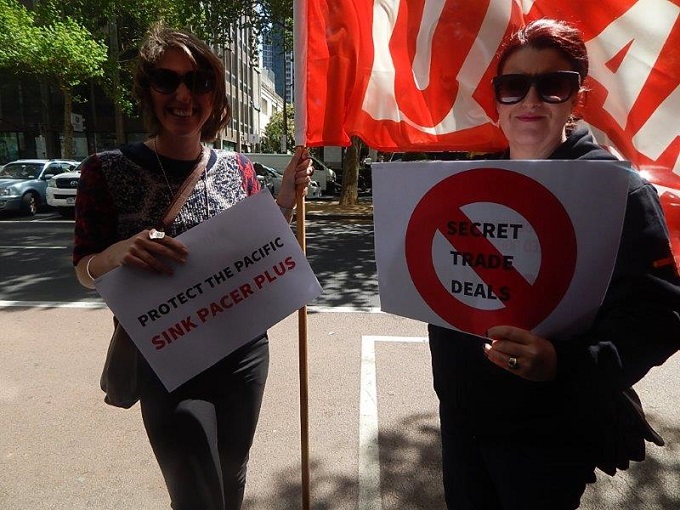 Barry Coates: PACER Plus – how the Pacific Way is being undermined

There were promises that this would not be a usual free trade agreement, but instead would be for the benefit of the Pacific.

However, announcements of the final agreement shows those promises have not be met. The agreement has been shaped more by the advantages to Australia and New Zealand exporters than the aspirations of the Pacific’s people.

One of the key benefits that the region was seeking was a substantial aid package that would enable Pacfic countries to increase their supply of goods and services for export. However, the amount provided of $55 million over 5 years, to be shared across the 12 Pacific island countries is less than 1 percent of the current level of NZ and Australian aid to the Pacific.

And thirdly, the Pacific wanted access to Australia’s markets. Currently Pacific exporters can’t export tropical fruit that is produced in Australia, like bananas and pineapples, and imports of kava are severely restricted.

However, PACER Plus does not include provisions to open up Australia’s markets, even though the Pacific countries are required to do so.

The Pacific will bear costs from PACER Plus. Firstly, there will be a loss of tariff revenue from reducing their tariff rates. This will have an adverse impact on funding for social priorities like health care and education, as well as the costs of protection from climate change impacts and adaptation measures.

The experience of Pacific nations, like Tonga, under the World Trade Organisation (WTO) shows that it is difficult to replace lost revenue through indirect taxes, like GST, a point made by the IMF.

Cutbacks in public services and public sector staff are likely to occur. This is likely to be exacerbated by the investment provisions in PACER Plus that will put pressure on governments to allow foreign investors to privatise those public services that are potentially profitable.

There have been calls for New Zealand to stop exporting fatty foods to the Pacific, but these restrictions are not included in PACER Plus.

Thirdly, PACER Plus will undermine producers and small business. Local food producers have long been concerned about PACER Plus, as was shown in a Social Impact Assessment undertaken by civil society organisations. Their livelihoods are already threatened by cheap and unhealthy imports that are undermining local foods.

PACER Plus is likely to accelerate that trend and prevent Pacific countries from being able to introduce measures that would restrict imports and favour the development of local foods. The development of most of the “developed” economies was supported through measures to provide initial protection while they were able to produce and gain competitiveness.

But these “infant industry” measures are restricted in PACER Plus. This was a key issue for Papua New Guinea and Fiji. As the Pacific’s largest economies, they need to provide local opportunities for youth employment and building a viable domestic economy is crucial for their development.

There are major implications on the smallest and most vulnerable Pacific countries. PACER Plus would extend the core of WTO’s trade rules to the Pacific island countries, such as Cook Islands, Federated States of Micronesia, Kiribati, Nauru, Niue, Palau, Republic of Marshall Islands and Tuvalu that are not WTO members.

Further, the absence of the two largest economies in the Pacific from PACER Plus (PNG and Fiji) undermines Pacific regionalism, an aim long supported by NZ and Australia. This undermines the Pacific Island Countries Trade Agreement (PICTA) and the Melanesia countries’ trade agreement.

PACER Plus also undermines the framework for Pacific regionalism, a long standing aim of Australia and New Zealand, as well as the Pacific island nations themselves.

The agreement has been driven too much by Australia and New Zealand’s commercial interests.

New Zealand Trade Minister, Todd McClay stated that PACER Plus “future-proofs our access.” This is achieved through “Most Favoured Nation” provisions that mean that Australia and New Zealand will get as good a deal as any other country.

This is likely to undermine preferences that could be provided to poorer developing countries. This “lock-in” of preferences has been resisted by Fiji and PNG. These disputes over PACER Plus are likely to drive deeper wedges in the relationships between NZ and these two most influential Pacific nations.

Finally, there has been a lack of transparency and constructive engagement with civil society in the Pacific. While there have been some meetings with civil society, and information sessions to NGOs and business, the text of PACER Plus has not been made available to civil society, small business or Parliamentarians to understand what is being signed.

Trade is crucial to the Pacific, but the agreements need to http://www.bilaterals.org/?-austral...be fair. PACER Plus will be officially signed in Tonga in June. There is still time for a rethink.

Barry Coates is a Member of Parliament for the Green Party, based in Auckland. He was director of Oxfam New Zealand for 2003-14, and has worked for many years on Pacific trade issues, in collaboration with Pacific civil society.