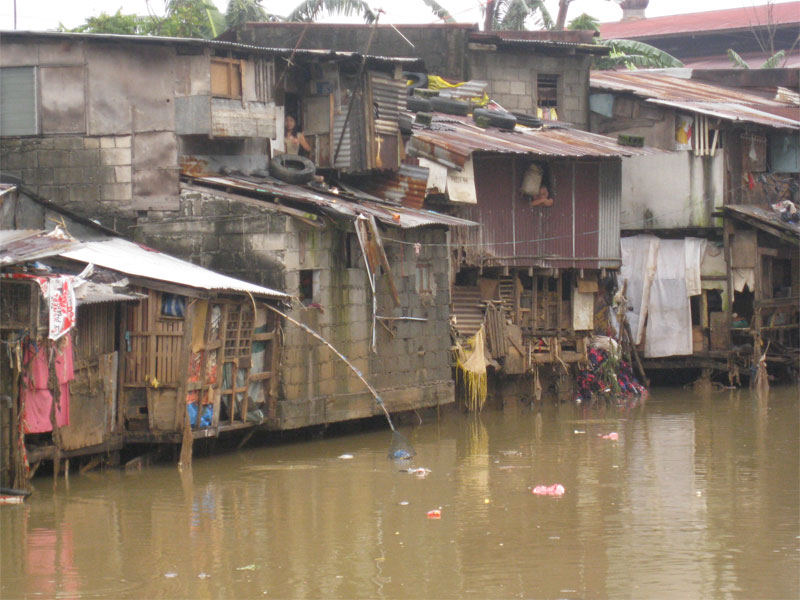 Just a few miles from the gleaming venue hosting President Barack Obama and other world leaders sits Manila’s slum of slums on a mountain of trash, a potent reminder to the Asia Pacific Economic Cooperation bloc that the globalization agenda it promotes has left many behind.

The shanty village lies on a massive garbage pile which once billowed smoke, hence its name, until the dump was shut down by the government in the 1990s as it tried to remove an eyesore that symbolized its failure to ease wrenching poverty.

With the closure, hundreds of garbage-scavenging families left in search of a livelihood elsewhere, but others such as the Sumaya family came and went as they drifted in a life of poverty and uncertainty.

It was unlikely Sumaya would know APEC. He doesn’t know who Obama is either.

The tubercular man dropped out of grade school in Ormoc city in the eastern province of Leyte because his father, a farmer, could no longer afford to pay for education. In Sumaya’s low-slung dwelling of scrap wood, tin and plastic there’s no toilet, tap water, radio and much less a TV set. Almost everything that his family owns was recycled from nearby garbage dumps, including a baseball cap that he wore backwards, his shorts and a pair of grimy Crocs.

Age and a variety of lung and other illnesses now keep him from wandering much, except when he peddles colorful hand-sewn pillows he and his wife craft from scrap cotton that they buy from Tondo’s junk shops.

"We need a small house that can’t be taken from us and any job for an old man like me," said Sumaya, when asked what message he would send to the global leaders meeting under extra heavy security in a convention center 11 kilometers (7 miles) away by Manila Bay.

He and his family, the poorest of the poor, have fallen through the cracks in a Southeast Asian country where more than a fourth of about 100 million people had been mired in poverty for decades. Millions more in the middle class have left the Philippines in search of menial jobs overseas.

President Benigno Aquino III has vowed to fight poverty and corruption during a six-year term that ends in June. His government says poverty levels have decreased a few notches under his watch. Officials credit an improving economy and a cash-transfer program that doles out money to more than 4 million indigent families upon conditions such as ensuring their children have regular medical checkups and don’t skip school.

Aquino and his officials, however, acknowledge that poverty remains a formidable dilemma.

In the wider Asia Pacific region, Obama and other heads of state worry that robust growth has eased poverty but not eliminated it. They are also concerned about the effects of rising inequality.

"Despite the unprecedented economic growth that has lifted millions of people out of poverty, it continues to be a reality for millions of others in the region," APEC leaders said in a summit statement seen by The Associated Press before its official release. "We call for more intensive efforts for its reduction and eradication."

As the theme-setting summit host, the Philippines has focused this year’s APEC talks on how the region of about three billion people could foster "inclusive growth." It’s also promoting support for small businesses, many provide employment and power local economies.

But opponents argue the APEC agenda of liberalizing trade further strengthens wealthy nations at the expense of developing countries, who largely can only compete in low wage industries such as garment manufacturing.

That was a central theme in the rowdy protests, mostly by labor and farmer groups, which dogged APEC and police on Thursday in Manila.

"If you stay just in your hotels and the convention center and the classy malls, you’ll be seeing only one percent of the Philippines," said a protest leader Teddy Casino. "I invite you to visit nearby communities or even just cross the street and you’ll see the truth that’s being hidden from you."

While poverty remains in the region, free trade policies that APEC has advocated since its 1989 founding have helped about half a billion people rise from poverty to the middle class, said Alan Bollard, executive director of APEC’s Singapore-based secretariat.

"We are all concerned, I think, in every economy about inequalities," Bollard said.

Asian nations not members of APEC have significantly lower incomes, higher poverty and problems with providing education and basic utilities such as electricity, said Eduardo Pedrosa of the Pacific Economic Cooperation Council.

The most remarkable reductions in poverty since the 1980s have been in China, Vietnam, Indonesia and Thailand. But at the same time, Malaysia, the Philippines and China have had big increases in inequality.

At Smokey Mountain, Sumaya’s village affords a commanding view of a placid Manila Bay with ships anchored off a busy port, where cranes constantly shift stacks of cargo containers. The scene reminds Juanita Espinosa, a neighbor of Sumaya, how far they have been left behind.

"If I were in business like them, my life wouldn’t be like this. My children would be in school and my grandchildren can finish their studies," said Espinosa, a 56-year-old laundrywoman.

"But how can that happen?" she asked, suppressing a giggle. "I don’t even have fare money to go and apply for a job and when they hand me the form, with the little that I know, how can I ever fill that up?"