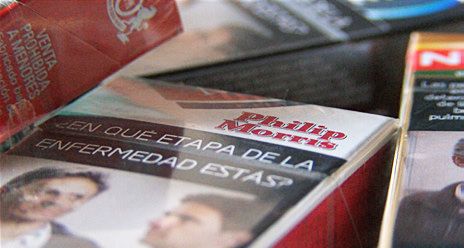 Uruguay started its crackdown on smoking in 2005, at a time when 40 per cent of adults smoked. Now, only 23 per cent of Uruguayans still have the habit. Among the young, where a third of all 12-17-year-olds smoked before, only 13 per cent do now.

As Philip Morris sues Uruguay over its health warnings, the tiny country has found itself a test case for big business lawsuits that could hit the EU.

Tiny Uruguay may not seem a likely front line in the war of the quit smoking brigade against Big Tobacco.

But the Latin American country has unwittingly found itself not just in the thick of that battle, but in the middle of an even bigger fight — that of the rising opposition to international free trade deals.

Philip Morris is suing Uruguay for increasing the size of the health warnings on cigarette packs, and for clamping down on tobacco companies’ use of sub-brands like Marlboro "Lights" which could give the impression some cigarettes are safe to smoke.

The tobacco behemoth is taking its legal action under the terms of a bilateral trade agreement between Switzerland — where it relatively recently moved from the US — and Uruguay. The trade deal has at its heart a provision allowing Swiss multinationals the right to sue the Uruguayan people if they bring in legislation that will damage their profits.

The litigation is allowed to be done in tribunals known as international-state dispute settlements (ISDS), ruled upon by lawyers under the auspices of the World Trade Organisation [sic*].

Such an ISDS agreement is also core to the EU’s planned Transatlantic Trade and Investment Partnership (TTIP) treaty being negotiated with the US. The critics of TTIP fear the tribunals will see US multinationals sue European governments in such areas as regulating tobacco, health and safety, and quality controls.

In the UK, critics have been particularly vocal about fears US healthcare companies now running parts of the NHS might use ISDS tribunals to sue future British governments wanting to reverse the accelerating privatisation of parts of the health service.

The British Government argues that such worries are "misguided" and says TTIP will create jobs and be good for the economy. ISDS agreements are necessary to give companies the confidence to invest, it says, particularly in more politically unstable countries.

The Marlboro maker is suing Uruguay — population 3.4 million — over its decision to increase the size of health warnings on cigarette packets from 50 per cent of the cover to 80 per cent.

Last week, Uruguay filed its 500-page defence, claiming that its government has a right and a duty to safeguard the health and wellbeing of its citizens and is complying with international treaties on tobacco controls.

Silvina Echarte Acevedo, the legal adviser leading the Uruguayan ministry of public health’s case, told The Independent: "They are bullying us because we are small. This is like David and Goliath. But we will fight because it is our right and duty as a government to protect our citizens’ health."

Ms Echarte Acevedo said it wasn’t just through the ISDS that Philip Morris had been putting on the squeeze. It closed its factory in Uruguay during the dispute, leaving 40 workers out of jobs. However, she said the government had re-employed eight of them as anti-smoking health advisers, while the others had found work elsewhere.

The defence cites Uruguay’s obligations under the World Health Organisation’s 2005 Framework Convention on Tobacco Control which has now been signed up to and enacted by nearly 200 countries and includes recommendations for health warnings on packs.

Uruguay, whose GDP of $53bn (£32bn) is dwarfed by Philip Morris’s annual revenues of $80bn, went ahead with its smoking curbs unbowed by the litigation, which has been dragging on since 2009 at a cost to the country of millions of dollars. Despite the lawsuit, it has gone further, banning cigarettes from being on show in shops.

It started its crackdown on smoking in 2005, at a time when 40 per cent of adults smoked. Now, only 23 per cent of Uruguayans still have the habit. Among the young, where a third of all 12-17-year-olds smoked before, only 13 per cent do now. Such facts form a key part of the country’s response to Philip Morris’s suit.

The Uruguayan case pre-dates the more famous but similar ISDS case brought by Philip Morris against Australia when the country banned logos on cigarette packets. The tobacco giant’s attack on Australia, which is ongoing, led New Zealand to U-turn on a decision to follow its bigger neighbour with plain packaging.

"Building a brand is a long-term significant investment which these governments have severely damaged, despite their pledge under binding international treaties not to deprive investors of their property without fair compensation in return."

It claimed Australia’s and Uruguay’s actions went further than "virtually any other country" and said tax records from cigarette sales showed they had "no effect at all" on consumption.

Patricia Lambert, director of the Campaign for Tobacco Free Kids, warned: "Britain is considering plain packaging of cigarette products. It is likely the cigarette industry will challenge that as well. The whole purpose of this is to intimidate other governments who will feel they can’t afford to take on the big companies."

* Investor-state dispute arbitration is generally done at tribunals operating under the auspices of the World Bank (ICSID), the International Chamber of Commerce or the UN (UNCITRAL), not the WTO. The WTO handles state-to-state disputes over implementation of its own rules and agreements.