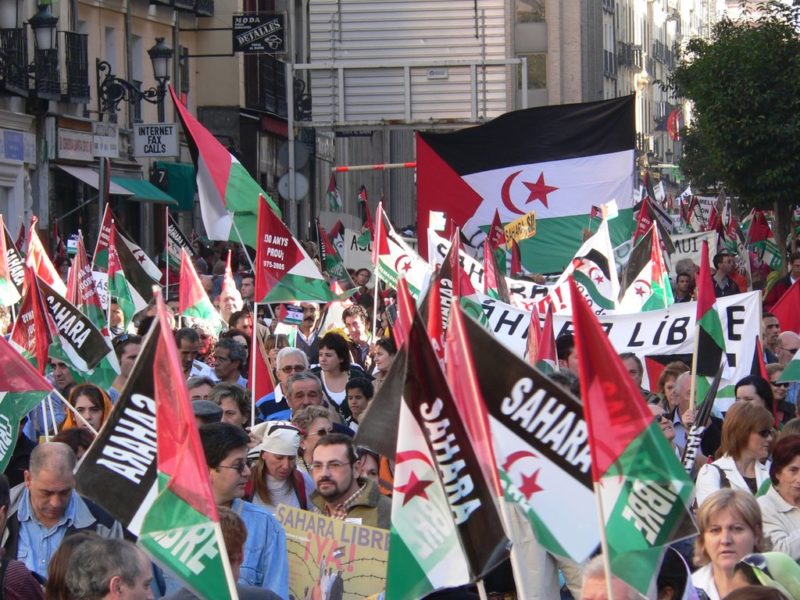 The UK Government is in the final stages of entering into a new trade agreement with Morocco including the territory of Western Sahara, without consideration of recent EU and British court rulings, or of the people of the occupied land.

The UK government could soon be ending up ignoring both its own and the European Court of Justice, by implementing a new trade deal in Western Sahara. They would do so by copying the EU’s approach to the topic, and ignoring the outcome of a long legal battle in UK and European courts. British civil society groups are concerned.

The outcome of such process would be the contrary of the geographical clarity that the UK has shown in its similar trade deal with Israel.

In March 2015, the Western Sahara Campaign in the UK (WSCUK) began legal proceedings against the UK Government, arguing that the UK’s Revenue and Customs Service (or HMRC) would be acting unlawfully if it gave preferential treatment to products imported to the UK from Morocco which had in fact come from Western Sahara. WSCUK argued that products originating in Western Sahara were being imported into the United Kingdom and treated as Moroccan for the purposes of the ‘EU – Morocco Association Agreement’.

In addition, the organisation argued that the UK’s Department for Environment, Food and Rural Affairs (DEFRA) could not lawfully grant fishing quotas to British fishing vessels in waters off Western Sahara.

The UK’s High Court of Justice referred the case to the Court of Justice of the European Union (CJEU), and on February 27th, 2018 the CJEU ruled that Moroccan territorial jurisdiction does not extend to the territory of Western Sahara or to the territorial sea adjacent to Western Sahara. This ruling was confirmed by the UK High Court in April of 2019.

On a separate case brought by the Polisario Front against the EU Commission, the European Court of Justice (ECJ), in its judgment (Case C-104/16 P) of December 21, 2016, determined that a 2012 “Agreement between the EU and Morocco concerning reciprocal liberalisation measures on agricultural products and fishery products” provided no legal basis for including Western Sahara within its territorial scope.

In spite of the decisions by the court, the European Commission pushed through a new trade and fisheries deal with Morocco that exactly includes Western Sahara. They did no effort to obtain the consent of the people of Western Sahara, but carried out what it called a ‘consultation process’ with Moroccan institutions in the occupied territory. The liberation movement Polisario is currently challenging the decision to proceed with the agreement at the ECJ.

The UK government is these days seeking to ‘roll over’ the EU-Morocco Association Agreement into UK legislation.

The Agreement was therefore subject to the UK’s Constitutional Reform and Governance Act (2016), which requires the Government to lay the Agreement before Parliament and became law on the 11th February 2020.

Although there was no guarantee of a parliamentary debate or vote in the British Parliament, Barry Gardiner, the Shadow Secretary of State for International Trade, on 23 January this year asked the International Trade Minister Conor Burns about the agreement. In his question, Mr. Gardiner said: "In its decision issued in March 2019, the High Court of England and Wales confirmed that the territory of Western Sahara is separate from Morocco under international law. It ruled that the UK Government were acting unlawfully by failing to distinguish between the territory of Morocco and the occupied territory of Western Sahara. Yet the trade agreement between the UK and the Kingdom of Morocco purports to apply to the territory of Western Sahara, despite the total lack of consent from the Sahrawi people. Will the Secretary of State explain why that is the case? Given that the Constitutional Reform and Governance Act 2010 process to ratify the agreement is now under way, is it her intention to hold a debate to discuss why the Government are proceeding to ratify a treaty that the High Court has ruled illegal?".

The UK’s International Trade Minister, Mr. Burns, failed to answer the question properly. He said the issue had been raised with Morocco, however, he did not mention what had been done in regards to obtaining permission from the people of Western Sahara, which is a separate territory from Morocco.

British civil society groups have urged their Parliamentarians to only accept the trade agreement if they are able to obtain robust guarantees that trade in the Western Saharan is taking part only with the full consent of the Saharawi people such that they decide for themselves who profits from the natural resources of their territory.

The lack of clarity is in clear contrast to the UK’s post-Brexit trade deal with Israel from 2019. The explanatory memorandum of that agreement states the following:

The UK’s trade deal with Morocco can only enter into force from January 2021. Until that time, a transition period applies during which the UK will abide by EU rules on trade and business.