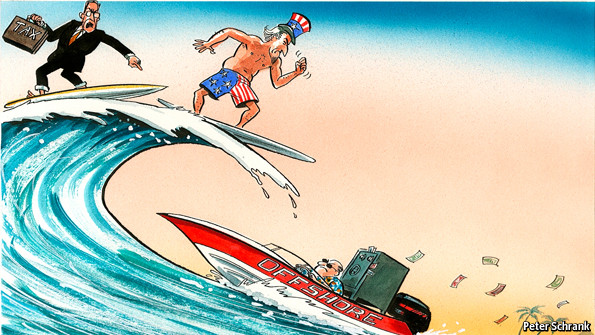 (Image by Peter Schrank, courtesy of The Economist)

Brussels wants finance rules back in US trade pact

By Christian Oliver in Brussels and Shawn Donnan in London

The EU is seeking to include financial regulation in a sweeping trade pact with the US, arguing that leaving it out of any deal would represent a threat to global financial stability.

The move hardens the EU’s position and establishes financial regulation as a potential stumbling block to an agreement that is facing vocal public opposition on both sides of the Atlantic.

Proposals to discuss banking rules in an US-EU trade deal have met stiff resistance from the US Treasury, which argues it is not a trade issue, and US officials have suggested that talks on regulatory convergence should take place outside the trade negotiations, as they do now.

However, with the support of many in the finance industry, EU officials have argued that leaving out any discussion of regulation of the financial services industry in the proposed Trans-Atlantic Trade and Investment Partnership would be an omission.

In a forceful position paper published on Monday, European officials went further, insisting that not including financial regulation in the discussions risked ignoring the lessons of the 2008 crisis. “The EU believes that financial regulation is too important to be discussed ad hoc, in informal settings at the very last minute, under market pressure,” European Commission officials wrote.

They also insist that differences in the implementation of financial standards risk opening the door to regulatory arbitrage across the Atlantic and undermining economic stability worldwide.

“The inconsistencies are not only significant barriers to trade and investment but they also undermine the global financial stability that both the US and EU have been seeking to achieve,” the commission said, adding that regulators were often unable to work together effectively.

The Transatlantic Trade and Investment Partnership would be the world’s biggest trade accord and, because tariffs between the two parties are already low, the most critical negotiations will focus on reducing regulatory barriers.

Although TTIP talks officially started in July they are still at a very early stage. A “stock-taking” meeting between Michael Froman, the US trade representative, and Karel De Gucht, the EU trade commissioner, is due to be held on February 17-18, when they will seek to define the main areas of any deal.

The range and complexity of the potential regulatory issues are so vast that EU officials admit they would be unlikely to be finalised in an original deal. Instead, TTIP would function more as a “living agreement”, which would establish a framework for regulators. Monday’s proposal said such a long-term framework would provide the “right setting” for discussions of financial regulation.

The US government has been concerned that Wall Street would seek to use regulatory convergence with Europe as a way of circumventing restrictions of the 2010 Dodd-Frank law. Mr Froman has said market access should be included in TTIP discussions of financial services but not regulation.

The commission’s proposal called for the US and the EU to “upgrade the mechanism for regulatory co-operation”. This would involve assessing whether there were grounds for “equivalence” between the two systems.

Brussels stressed that it was not calling for each side to accept the other’s regulations outright but that regulators could defer to each other when the two systems were equivalent. “This could potentially lead to mutual reliance on the rules of the other party,” the commission said.

Brussels also insisted that financial regulation could not be put on to a parallel negotiating track outside the TTIP talks.

“The EU believes that financial regulation is too important to be discussed ad hoc, in informal settings at the very last minute, under market pressure. To respond to these concerns, the EU proposed that the TTIP establishes a framework for regulatory co-operation in financial services.”