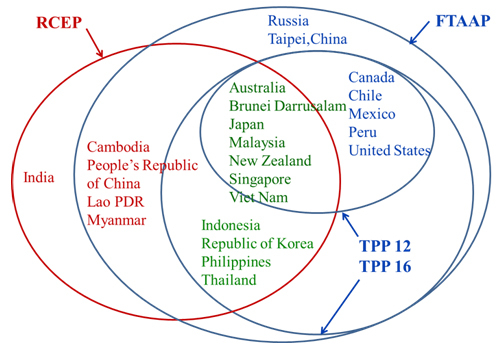 VietNamNet Bridge – The proposed APEC free trade agreement (FTAAP) is expected to be on a larger scale than the Trans Pacific Partnership (TPP) agreement, but many Vietnamese businesses are not enthusiastic about the trade pact.

Several trade and economic agreements, including TPP and RCEP, are being discussed in Asia now.

The TPP, or the Trans-Pacific Partnership, is a proposed regional free trade agreement that is currently being negotiated by 12 countries throughout the Asia-Pacific region, while RCEP, the Regional Comprehensive Economic Partnership, is a proposed free trade agreement (FTA) between 10 member states of the Association of Southeast Asian Nations (ASEAN) and six states with which ASEAN has existing FTAs.

While the TPP and RCEP negotiations are progressing slowly, another free trade area has been proposed – the FTA of the Asia Pacific – which would comprise Vietnam and 20 other countries.

If the area is established, FTAAP will be one of the world’s largest free trade areas with the presence of the three world’s leading economies – the US, China and Japan – and other significant economies, including Australia, South Korea, New Zealand, Canada and Russia.

The economic bloc, once formed, would comprise 57 percent of global GDP and 46 percent of trade value. For TPP, the figures are 40 percent and 26 percent, respectively.

In fact, the FTAAP was once raised at the ASEAN summit in 2006. However, China has urged speeding up the FTA, suggesting that official negotiations should begin by 2020.

As for Vietnam, APEC countries are the most important trade partners. Therefore, some analysts believe that Vietnam will actively push to further the FTA process.

However, Vietnamese businesses said they do not have high expectations for this FTA.

An economist commented that it is too early to rejoice at the news, because it is unclear if the tariff removals would bring benefits to Vietnam, or if the FTA would increase Vietnam’s trade deficit with China.

He said that Vietnam’s most competitive business fields are labor-intensive industries. However, even in advantageous fields, Vietnam still finds it difficult to compete with Chinese businesses which have a larger scale and higher productivity.

Russia also could be a big challenge for Vietnam. The Vietnam Steel Association has warned that many domestic steel companies will go bankrupt once they have to compete with a giant steel manufacturer like Russia, and once the import tariff on Russian goods falls to zero percent.

Both Russia and China are members of APEC.

The economist also doubts Vietnam will be able to take full advantage of the new FTA.

A report of the Hong Kong and Shanghai Banking Corporation (HSBC) showed that only 37 percent of Vietnamese businesses have taken full advantage of existing trade agreements to gain benefits.

Meanwhile, Toshihiro Atsumi, a professor of the Japanese Meiji Gakuin University, has expressed doubts about the impact of FTAAP on the economic bloc.

At least 40 percent of APEC members have had trade agreements with other members. The figure would be 100 percent if TPP and RCEP are signed. Therefore, FTAAP may no longer have an impact on member economies, as initially planned.