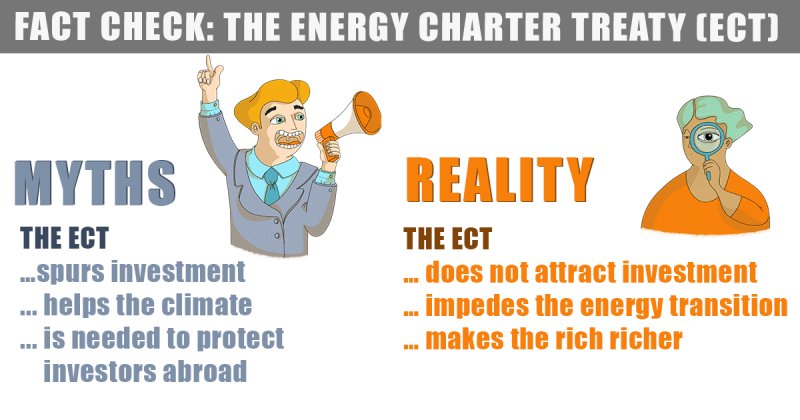 This week, members of the Energy Charter Treaty (ECT) will hold their annual conference and assess ongoing attempts to reform the controversial agreement. Amidst growing concerns that the ECT undermines urgent climate action, its corporate profiteers, the ECT Secretariat, and others are spewing propaganda, promoting falsehoods about how the treaty attracts clean investment and how its ‘modernisation’ will fix any flaws. Cut through the rhetoric with our myth-busting guide to the ECT’s world of dirty energy, highway robbery, and corporate abuse.

Read the in-depth myth-buster on the ECT here

Governments must take urgent action to tackle the climate crisis. Above all, they need to move away from coal, oil, and gas, and towards a renewable energy future. Much of the world’s fossil fuel reserves need to stay in the ground if we want to prevent runaway climate change.

But governments which phase-out coal, end gas production or stop new oil pipelines to keep fossil fuels in the ground could be held liable for billions in damages under the Energy Charter Treaty (ECT). The ECT allows foreign investors in the energy sector to sue governments for decisions that might negatively impact their profits – including climate policies. UK-based oil and gas company Rockhopper, for example, is suing Italy over a ban on new offshore oil drilling. Finnish/German coal company Fortum/Uniper is threatening to sue the Netherlands for phasing out coal. Claims take place outside of existing courts, in shadowy arbitration tribunals run by three private lawyers.

Governments have already been forced to pay out enormous sums. Pending ECT claims total around US$28 billion. The actual figure could be more than twice that amount since pay-out information is publicly available in only 24 out of 51 cases. But US$28 billion is a staggering sum – equivalent to the estimated annual cost for the African continent to adapt to climate change.

Opposition to the ECT is growing rapidly. In October 2020, the European Parliament voted to end the ECT’s protection for fossil fuels. In November, 280 parliamentarians called on the European Commission and EU members to “explore pathways to jointly withdraw”. In December, over 200 climate leaders and scientists echoed that demand calling the ECT “a major obstacle” to the clean energy transition. Behind the scenes in the Council, EU member states like France, Spain, and Luxembourg, too, have raised the withdrawal option if the ECT cannot conform to the Paris Climate Agreement. Belgium has even asked the European Court of Justice if the ECT is at all in line with EU law.

But powerful interests want to prevent countries from leaving the ECT – and even expand it to new signatory states. And they will say anything to succeed. Let us guide you through some of their key myths and “alternative facts” so you can easily unpack the spin on the ECT.