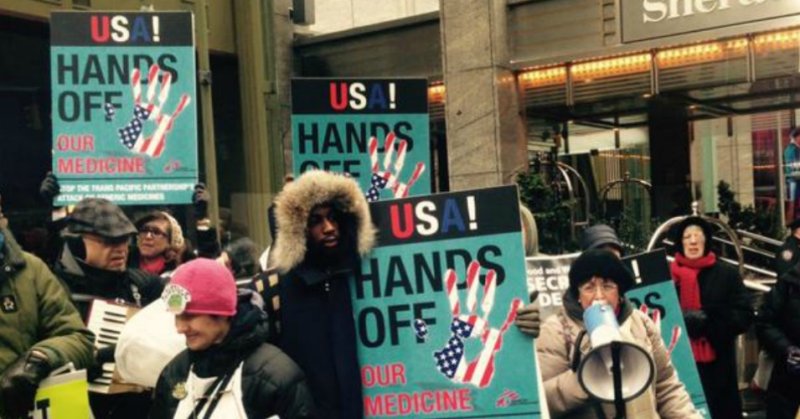 It’s a global health issue, says advocate. ’Countries are trying to fight epidemics and this puts the process over people.’

Braving snow and blizzard warnings, health, labor and environmental activists rallied outside a New York City hotel on Monday where industry leaders met with international trade representatives to commence the "final negotiations" over the secret text of the Trans-Pacific Partnership.

Leading the protest and carrying signs that read "Hands Off Our Medicine," protesters with health groups Doctors Without Borders and Health Global Access Project (GAP) warned that the TPP will undermine efforts to ensure access to affordable, life-saving medicines in both the United States and abroad.

Roughly one hundred people, including the Teamsters and the Raging Grannies, joined the health activists in chanting "Derail Fast Track," in reference to the Administration’s push to pass the agreement quickly without Congressional interference.

"The TPP would create a vicious cycle. The provisions currently proposed will allow for fracking and other practices that fuel environmental degradation and make people sick. Strengthened intellectual property rules will then prevent people from accessing life- saving medicines," said Michael Tikili, national field organizer for Health GAP, in a press statement. "Thirteen million people living with HIV depend on generic AIDS medicines and another 20-plus million are waiting line for treatment. By protecting Pharma’s bloated profits, the Obama administration is undermining its own global AIDS initiative—this isn’t a trade agreement—it’s a death pact."

As Tikili further explained to Common Dreams, national efforts to end epidemics such as HIV and Hepititis C are being thwarted by the prospective trade laws which would threaten generic manufacturers in countries with patent suits. For instance, Tikili says, the U.S. government says it is "going to war on HIV" while at the same time pushing laws that limit drug production and access in certain countries.

"It is a public health issue, a global health issue," Tikili said. "Countries are trying to fight epidemics and this really limits that. It puts the process over people."

Most of the agreement details have been so kept in the shadows that many members of Congress have not seen the text. What little is known has been revealed through leaks.

According to Health GAP, leaked drafts of the TPP revealed that the U.S. is seeking stronger, longer, and more accessible patent monopolies on medicines and new monopolies on drug regulatory data that would prevent marketing of more affordable generic equivalents. The TPP will reportedly also place some of the "most severe intellectual property rules ever demanded in international trade," including strict price control measures and enhanced investor rights that would permit Big Pharma to sue governments when they expect profits will be undermined by government policy.

After the rally, protesters reportedly marched to the office of Senator Chuck Schumer (D-N.Y.) to call on the lawmaker to oppose Fast Track authorization and demand to see the the contents of the agreement.