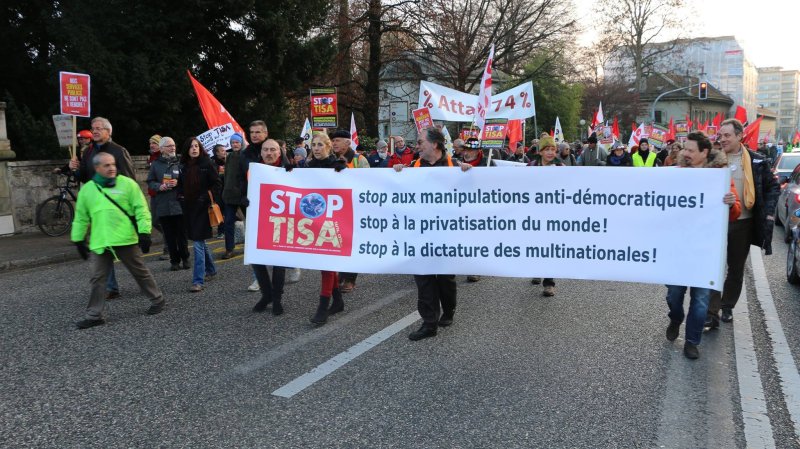 A new campaign to be launched tomorrow by the ITF (International Transport Workers’ Federation) reveals the threat to jobs and workers’ rights posed by the Trade in Services Agreement (TiSA).

The new project enlists the power of trade unions to fight back against the deal, which has been negotiated in virtual secrecy by the European Union and 22 other countries. One of its core aims is to definitively prove the danger to rights, conditions and democracy posed by TiSA, in order to provide the information needed to oppose it. All the information will now be findable in one place: www.tisameanstrouble.org.

Unveiled at the site is the latest research into the effects of TiSA on transport workers, commissioned by the ITF and the Friedrich-Ebert-Stiftung (see the full report at https://goo.gl/39AmQK or the executive summary below), along with leaflets, a poster (attached) and more information.

ITF president Paddy Crumlin commented: “TiSA would supercharge the most powerful companies in the transport industry, giving them preferential treatment. What’s missing from this equation is any value at all for workers and citizens. It creates serious barriers for any state wanting to invest in, manage and operate its national infrastructure or – crucially – to defend decent work and decent terms and conditions across transport. It is our duty as trade unionists to build the knowledge and alliances needed to challenge the secrecy and lack of democracy involved, and develop realistic, worker-centred alternatives.”

ITF general secretary Steve Cotton stated: “Despite the wall of secrecy constructed around the TiSA talks, it’s well known that the deal represents a threat to hard-won workers’ rights and conditions. But what isn’t so well known is the way it directly threatens transport workers’ jobs. We aim to put that right. At the moment negotiations are suspended pending the scheduling of a new round of talks. That gives us a one off window of opportunity for a hard-hitting informational campaign to help challenge this unrepresentative and undemocratic deal.”

The International Transport Workers’ Federation (ITF) is a global trade union federation. The rules that govern the global services market shape the daily lives of its affiliated unions and their members. The Trade in Services Agreement (TiSA) has the potential to dramatically change that world. The negotiations are currently paralysed. This is the time for the ITF and transport workers everywhere to make their voices heard.

They are on a mission to create a ‘21st century’ agreement that serves the interests of the world’s most powerful corporations for decades to come. Governments are agreeing to put handcuffs on their right to regulate services and technologies, including those that don’t yet exist. Uruguay and Paraguay quit this club after strong union-led campaigns demanded the right to decide their own futures.

The corporate cheerleaders, called Team TiSA, are dominated by tech giants like Microsoft, IBM and Google, global logistics and transport operators like DHL, Fedex, and UPS, and finance moguls like Citigroup and AIG. They have privileged access to negotiators. Legislators, unions and social movements from TiSA countries are shut out.

Team TiSA want global rules that allow them to run e-commerce and global supply chains seamlessly across the world using digital platforms and new technologies. TiSA would require governments to remove national and local government laws and practices that the corporations see as barriers, including protections for workers – or at least freeze them at their current level, and promise never to adopt new regulations that might restrict existing and new services or technologies (think of drones, robots and driverless vehicles). TiSA’s transparency annex would give other TiSA governments and corporations rights to lobby against proposed regulations that affect their interests.

TiSA and the fourth industrial revolution

The radical impact of new technologies has been called the ‘fourth industrial revolution’. ‘Free trade in services’ through TiSA would remove restrictions on its expansion. That means continuous reorganisation and disruption, as corporations respond to new technologies, shifts in market, the cost of labour and automation. Corporate wealth is bound to strengthen the power of those who control global supply chains and digital technologies. Their actual operations will run through layers of competitive contractors who employ a fragmented, vulnerable, de-unionised and exploited international workforce.

Continuous restructuring and chronic instability will create large scale unemployment and social disruption. Already digital technologies are transforming what workers do, where they are located, how they are employed, by whom and on what terms, and their ability to organise and bargain collectively (or bargain at all). Workers are pitted against workers in a battle for survival that is not of their making.

Transport workers already face these challenges every day. The pace of change is unpredictable. Air and maritime cargo transport and ground haulage will remain essential to move products around, but they will play different roles as production and supply chains, and their ownership, are reorganised. ‘Bricks and mortar’ type production and warehousing operations may become unrecognisable. The future of bricks and mortar retailing is least certain. Traditional firms like DHL and Fedex could struggle to survive as operators such as Amazon or AliBaba change how the global economy operates.

TiSA will not cause this new revolution. It will intensify the current pace of change, competition and unpredictability, and governments won’t be able to address many of the problems that it creates. The actual agreement involves a core text, based on an existing World Trade Organization agreement known as the GATS (General Agreement on Trade in Services) and around 18 annexes that cover specific sectors such as maritime, air and road transport, delivery services, labour mobility, financial services, and e-commerce. A country’s obligations can be enforced by other TiSA countries (not by their corporations) through offshore tribunals where the judges are trade experts. If the rules are breached, a country can face serious penalties against its trade in goods, agriculture or services.

What TiSA aims to do:

The ITF’s transport and delivery sectors

As well as TiSA’s general impacts on national and global economies, some annexes specifically target the post and courier, maritime, air and road transport sectors. Their goals reflect the demands of the big industry lobbies:

The annexes on labour mobility and road and freight transport encourage governments to guarantee temporary entry for foreign contract workers to deliver services under their home country terms of employment, which would deepen problems of social dumping. TiSA’s corporate-driven rules on delivery and air and maritime transport services also threaten the role of specialist international organisations like the IMO (International Maritime Organization), ICAO (International Civil Aviation Organization), UPU (Universal Postal Union) and ILO (International Labour Organization). These are places where the ITF and other unions work to protect workers’ rights and interests and balance economic and social, consumer and security concerns.