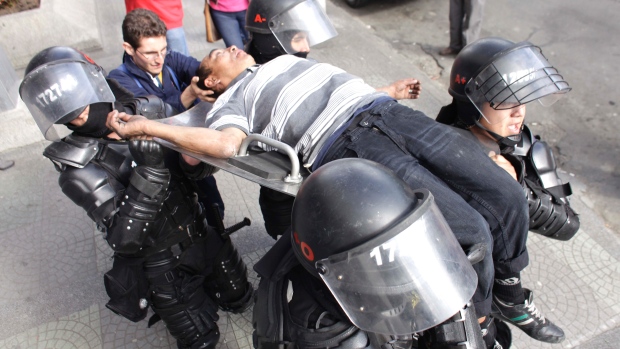 A new report Colombia in the Shadow of Human Right Abuses confirms that human rights violations have not abated over the four years since the implementation of the Canada-Columbia Free Trade Agreement (CCOFTA).

Colombia in the Shadow of Human Rights Abuses, produced by the Colombia Working Group, a platform of Canadian unions, NGOs, and social organizations consolidates compelling data documenting human rights violations in Colombia against trade unionists, human rights defenders, indigenous and Afro-descendent communities. The report and accompanying fact sheets, provide essential information that is unreported or glossed over in the Government of Canada’s annual reports on the impact on human rights of the free trade agreement between Canada and Colombia.

While many sectors of Colombian society work towards building the foundation for peace, and peace negotiations progress in Havana, the Canadian government continues to fail to support human rights, social and economic justice in Colombia. Instead Canada focuses its resources on promoting private investment and investor rights in the energy and resource sector while at the same time pursuing a deeply flawed Corporate Social Responsibility strategy that allows Canadian corporations to operate in Colombia with impunity. Disturbingly Canada continues to sell military equipment to Colombia through its Canadian Commercial Corporation as the Conservative government promotes Canada’s defence industry as an economic priority.

Annie Jusbainville from Projet Accompagnement Solidarité Colombie said "the government’s HRIA report dismisses labour concerns over unjustified stopping of citizens in the vicinity of a particular company by security force because they can’t be linked to actions taken under CCOFTA in 2014. Nonetheless, the mobilizations of the past year clearly demonstrate that the Free Trade Agreement (FTA) has provoked human rights violations and underlines the dishonest nature of the Canadian government".

The pressure on the rural economy created by the so called FTA with Canada and the United States, have led to many strikes in Colombia’s rural sector, leading to a general strike in 2014. As a result, the Colombian government was obliged to establish a round table to discuss issues such as territorial politics, a renegotiation of the FTA and a moratorium on mining and oil projects. The System of Information about aggressions against defenders of Human Rights (SIADDHH) in their annual report on the human rights’ situation in Colombia clearly establishes a link between the increase of violence and the mobilization periods.

Ken Neumann, Canadian National Director for the United Steelworkers, said that "The Canadian Government’s recent HRIA acknowledges labour concerns that the kind of jobs created in Colombia’s petroleum industry are precarious in nature, with little job security, again illustrating that the claims that the CCOFTA benefits Colombian workers are unsubstantiated and completely overblown, as is established in our report Colombia in the Shadow of Human Rights Abuses.".

To read In the Shadow of Human Right Abuses report or its accompanying factsheets visit http://www.commonfrontiers.ca/Colombia/index.html