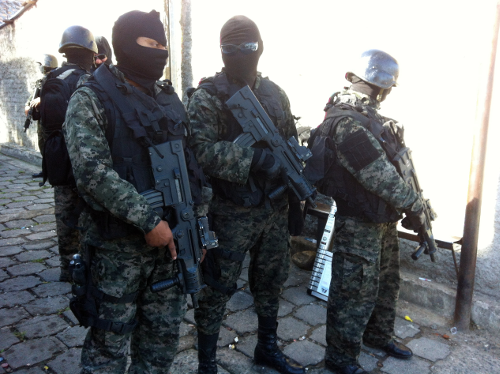 Ed Fast, Canada’s Minister of International Trade, and Honduran Minister of Industry and Commerce Adonis Lavaire signed the deal in Ottawa, less than three weeks before general elections are expected to change the political landscape in Honduras.

“It’s really uncertain what’s going to happen with the elections,” said Karen Spring, a Canadian human rights activist living in Honduras. “It’s a lot less likely for [Canada] to have a government – and the political conditions and the economic conditions – in [Honduras] that would approve the free trade agreement or would allow it to be approved.”

Recent polls show two leading presidential candidates: LIBRE candidate Xiomara Castro, the wife of Manuel Zelaya, who was ousted as President in a coup d’état in June 2009 and the ruling National Party’s Juan Orlando Hernández, former President of the National Congress who resigned in order to run for office.

The November 24 general elections are expected to mark the end of a longstanding two-party system. Nine political parties are participating, and it is unlikely that any one party will hold a majority of seats in Congress.

“Because of the strong political force of the LIBRE party and its bases, the National Front of Popular Resistance, there’s a really good chance they can either gain a lot of seats in Congress or they can win the presidency,” Spring told Upside Down World. Whether or not LIBRE congressional representatives would pass the free trade agreement or not is uncertain, but the political landscape will undoubtedly change. “I think the Canadian government knows very well that after the elections on November 24, it’s going to be a lot more difficult to pass any free trade agreements,” she added.

Negotiations leading to the Canada-Honduras Free Trade Agreement (FTA) began back in 2001, though they were initially for a deal between Canada and the C4 countries: Guatemala, Honduras, El Salvador, and Nicaragua. After nearly a decade of multilateral talks and a number of impasses, Canada and Honduras decided to pursue a bilateral agreement in 2010, the year following the coup d’état.

Before it comes into effect, the Canada-Honduras FTA must be approved by both Canadian Parliament and Honduran Congress. Current representatives of the latter will sit until a few days before the new administration assumes power on January 27, 2014.

Canada exported $38 million in goods to Honduras in 2012, and imported $218 million. Top Honduran exports to Canada are agricultural products and apparel, and the leading product Canadian exports to Honduras is fertilizers. Recent government figures on Canadian direct foreign investment are unavailable.

In its official press release announcing the signing of the FTA, the Canadian government focused on the elimination of tariffs and improved access for the export of Canadian pork and beef. However, controversial Canadian mining, sweatshop, and tourism sectors also stand to benefit from investment protection measures contained in Chapter 10 of the bilateral free trade agreement.

“In a country like Honduras, using free trade agreements to open the domestic economy to competition with countries with asymmetrical economies has only attracted transnational companies which operate and implement work systems that exploit Honduran women workers,” wrote the Honduran Women’s Collective (CODEMUH), in a statement in response to the signing of the Canada-Honduras FTA.

The organization is currently dealing with more than 100 textile factory workers who are suffering from work-related injuries and health conditions related to their employment by Gildan Activewear, a Montreal-based clothing manufacturer. The company operates several sewing and manufacturing facilities in northwestern Honduras, as well as others in Nicaragua, Haiti, the Dominican Republic, and Bangladesh. Gildan’s gross profits in 2012 were just shy of $400 million, while net earnings reached $148.5 million.

“Exploitative and enslaving working conditions – such as those which exist in Gildan Activewear headquartered in Canada and promoted by nation states and trade agreements – involve normal work days of an illegal 11 and a half hours, with obligatory overtime, bringing the work week to up to 69 hours,” according to the statement by CODEMUH. Canadian companies and investors in Honduras have not only come under fire for their treatment of workers, but also for their impacts on communities.

“We have come to see that Canadian tourism has been the most aggressive in Garifuna communities in recent years,” said Miriam Miranda, General Coordinator of OFRANEH, an indigenous Garifuna federation. The lands and traditional territories of the 46 Garifuna communities spread up and down the Caribbean coast of Honduras are prime targets for tourism and real estate development projects. “There’s no respect whatsoever for the rights of Indigenous peoples,” said Miranda.

“They used the Law of Forced Expropriation in the case of Trujillo, but it was used to impact Garifuna communities. They never use it to return land to Garifuna communities,” Miranda told Upside Down World. “The last people who refused to sell [their land] were told ‘if you don’t sell, we’ll take your land away.’”

The first phase of the Banana Coast pier was inaugurated in June 2013. Jorgensen has also invested in a mountainside gated community of villas in the traditional territories of the Garifuna communities of Santa Fe, Barrio Cristales and Rio Negro. They’re not the only Canadian projects in the area, said Miranda. There have been incursions by Canadian investors into Garifuna territory in and between the Garifuna communities of Rio Esteban, Guadalupe, San Antonio, Santa Fe, Rio Negro and Barrio Cristales, linking a stretch of coast from Rio Esteban to Trujillo. And it’s a phenomenon that’s not limited to the coast.

“All of the territories are kind of on the table right now to see how they can be exploited - not just mining, not just tourism, but anything where public goods, resources can be exploited,” said Miranda. There’s currently an unparalleled exploitation of resources by transnational foreign capital in Honduras, she said, and the post-coup government has gone out of its way to protect foreign investment.

“These days, Canadians – together with the Taiwanese and Chinese – are the ones with the most aggression towards the territories,” said Miranda.

As with many FTAs, the Canada-Honduras agreement is accompanied by parallel agreements on labor and the environment, but Common Frontiers Program Director Raul Burbano and Americas Policy Group Coordinator Stacey Gomez maintain they’re just for show. “The labor and environmental side agreements are mere window dressing given that they are not accompanied by any real enforcement mechanism to ensure they are adhered to,” they wrote in a November 5 Open Letter.

Chapter 10 of FTA itself includes a brief mention of labour, environmental and human rights, but – unlike the investment protection measures – there are no enforcement measures. “Each Party should encourage enterprises operating within its territory, or entreprises [sic] subject to its jurisdiction, to voluntarily incorporate internationally recognized standards of corporate social responsibility in their internal policies,” according to Article 10:16. The full text of the agreement was only made public after it was signed.

While the FTA was signed in Ottawa, the reality on the ground in Honduras remained one of increasing militarization and ongoing repression.

Murders of journalists, lawyers, and Indigenous and campesino people involved in land and resource struggles continue in the country, which has one of the highest per capita murder rates in the world. People involved with the LIBRE party have also become targets. Rights Action’s Spring has been researching pre-electoral political violence and compiled a list of murders and armed attacks on political party-affiliated candidates, campaigners, and activists between May 2012 and October 19, 2013.

Militarization has increased hand-in-hand with repression since the 2009 coup. Not only are soldiers patrolling the streets alongside the national police force, but a new military police force hit the streets in October 2013. Legal challenges to the constitutionality of the new security force, operating directly under military command, are currently underway. In response, on November 6 the National Party’s presidential candidate Hernández introduced a proposal to Congress to reform Article 274 of the Constitution in order to grant constitutional standing to the military police force. This has become a cornerstone of his electoral campaign.

The controversy surrounding the military police has been subject to recent media coverage in Honduras, but the involvement of mining companies and other private sector corporations in financing public security forces no longer makes headlines. The General Mining and Hydrocarbons Law ratified in January 2013, after a review by advisors paid by the Canadian government, includes as part of its royalty regime a two percent payment to the Security Tax (Tasa de Seguridad) fund. The fund is helping to finance the increasing militarization of Honduran streets.

Who will win the November 24 elections is uncertain at this point. But no matter which political party comes out on top, if the Honduran Congress passes the Canada-Honduras Free Trade Agreement into law, it will be a win for Canadian companies.

Sandra Cuffe is a vagabond freelance journalist currently based in Honduras.