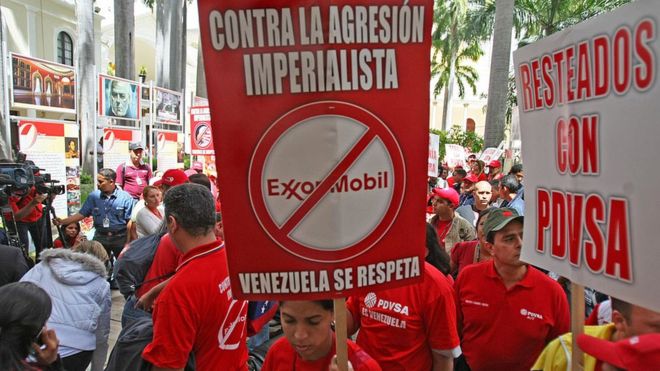 Celebrating Venezuela’s annulment victory over Exxon as a "progressive" ruling? hold the Champagne and read this first

An ICSID Annulment Committee’s decision to reduce the damages to be paid to Exxon (Mobil) by $1.4 billion seems like a cause for celebration-a victory of economic sovereignty over Big Oil. But as gifts to economic justice go, this one is a Trojan horse indeed.

Now there can be no doubt that the original decision annulled was utterly outrageous. There was a negotiated cap on liability in an agreement between the investors and the Venezuela state entity in question. The tribunal of first instance allowed the investor to circumvent a proper contractual settlement of the dispute through some of the typical techniques that arbitrators use to enrich themselves through hearing cases that are, fundamentally, an abuse of process. In this instance, the tribunal held that customary international law principles of just compensation overrode the contractual cap.

It was sufficient to annul the decision to find that the contract defined and circumscribed the protected value of the investment and that in fact it was thus crucial for determining what would be just compensation under custom, i.e. what was the value to be compensated; by not applying the law of contract in conjunction with custom, the tribunal failed to apply the applicable law, an annulable error. Now the Annulment Committee did seem to accept this pivotal and ironclad argument, made by Venezuela.

However, the tribunal went on to make a finding not required to annul based on the reasoning just discussed. The additional finding is summarized by the tribunal as follows: "The Tribunal manifestly exceeded its powers to the extent that it held that general international law, and specifically customary international law, regulated the determination and assessment of the compensation due to the Mobil Parties for the expropriation of their investment in the Cerro Negro Project, in place of the application of the provisions of the BIT".

So why would the tribunal have made an unnecessary and illogical jurisprudential move to suggest that the tribunal below had no jurisdiction to apply custom at all, having already come to the correct result from its understanding of the tribunal’s annulable error in not applying the liability cap in the contract to determine what is required by custom?

The answer to this question may lie in another recent award of an ICSID tribunal, Urbaser v. Argentina. In that decision, which is indeed an unusually progressive one, and owes much I reckon to the presence on the tribunal of the superb international legal scholar Campbell McLachlan, a counter-claim by Argentina on human rights grounds was allowed;ultimately the claim failed due to the the tribunal’s (problematic-a subject for a future post) interpretation of the human rights obligations in question. But in allowing in principle the human rights counter claim, the Urbaser v. Argentina tribunal relied on a provision in the treaty that makes general international law principles part of the applicable law, as was the case with the treaty in the Exxon (Mobil) v. Venezuela case just discussed. The Urbaser tribunal found: "As far as recourse to the “general principles of international law” is concerned, such reference would be meaningless if the position would be retained that the BIT is to be construed as an isolated set of rules of international law for the sole purpose of protecting investments through rights exclusively granted to investors." (paragraph 1189) Unlike the Exxon (Mobil) Annulment Committee, the Urbaser tribunal understood correctly the meaning of "general principles of international law"; there was no mangling of the wording here to reduce the notion to principles from municipal law systems. General principles included, for sure, even conventional human rights obligations.

So the Exxon tribunal, while doing the right thing as far as the result, went out of its way to put a poison pill for human rights in its award. If other tribunals followed the utterly unwarranted meaning attributed to "general principles of international law" by the Exxon tribunal, claims, counter-claims or even defenses based on international human rights or environmental or labor law, could be easily thrown out. Assuming Urbaser created any progressive momentum in a system without real stare decisis and dominated by the arbitrator/counsel clique, this momentum could be stopped dead in its tracks.

The chair of the Annulment Committee, I note, was Frank Berman of Essex Chambers; the role of the Chambers in working for Chile to frustrate the effort in England to bring General Pinochet to justice for crimes against humanity/gross human rights violations is sketched in this litigation document. Berman and his Essex buddy V.V. Veeder are arbitrators who are (understandably) being challenged for conflict of interest/bias in another ICSID case I’ve blogged about here: Casado and Allende Foundation v. Chile, which has serious human rights implications. In that case, the investor claimant owned a newspaper that was seized by the junta in the military coup that brought Colonel Pinochet to power-the very same Pinochet whom Berman’s and Veeder’s Essex Chambers had sought to protect from human rights accountability. Small world!