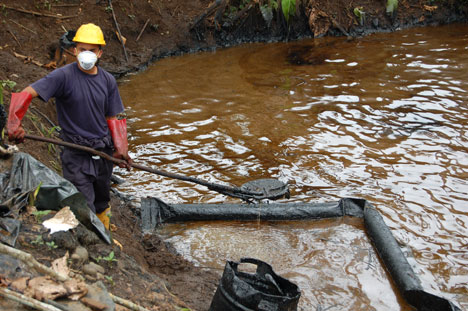 "It’s really the government of Ecuador that should have to pay," said Randy Mastro, a partner at Gibson Dunn & Crutcher LLP representing Chevron

NEW YORK, Aug 5 (Reuters) — Chevron Corp urged a federal appeals court not to force it into Ecuador’s courts to defend a $27.4 billion lawsuit alleging its oilfields polluted the Amazon rainforest and sickened thousands of Ecuadorians.

Lawyers for Chevron contended the U.S. Second Circuit Court of Appeals in New York should instead uphold a lower court ruling in March allowing the second-largest U.S. oil company to take the 17-year-old case into international arbitration.

Ecuadorian farmers and indigenous residents accused Texaco, which Chevron bought in 2001, of making residents ill and damaging forestry and rivers through the discharge of some 18 billion gallons of toxic water into the rainforest.

While Texaco had oil operations in Ecuador from 1964 to 1992, Chevron wants the country and state-owned Petroecuador, once a Texaco partner, to handle further cleanup and remedial costs, saying Texaco was released in 1998.

"It’s really the government of Ecuador that should have to pay," said Randy Mastro, a partner at Gibson Dunn & Crutcher LLP representing Chevron, during the unusually long 1-3/4-hour argument on Thursday before a three-judge Second Circuit panel.

But lawyers for Ecuador and the residents said the matter should be tried in the Ecuadorian town of Lago Agrio.

Jonathan Abady, a lawyer for the farmers and residents, said Chevron was trying to back out of its "unequivocal" agreement to let Ecuador’s courts handle the case.

"It’s shameless, an offense to this court," for Chevron "to engage in a global forum-shopping spree," said Abady, a partner at Emery Celli Brinckerhoff & Abady LLP.

Chevron is hoping both to avoid liability, and to ensure that Ecuador will cover its losses if it were found liable.

The San Ramon, California-based oil company has accused Ecuador of breaching the U.S.-Ecuador Bilateral Investment Treaty (BIT), and interfering with and thus tainting litigation in the Lago Agrio court.

After a different judge in that case recused himself amid allegations of bribery, the current judge said a verdict is unlikely before early 2011.

"Are you really asking the arbitral court in the Hague that you are not liable to the plaintiffs?" Lynch asked.

Mastro later responded that "we have not and will not ask the BIT tribunal to stop the entry of a judgment," but that "we do intend to fight enforcement."

Texaco had been based in Harrison, New York, within the Second Circuit’s jurisdiction. The Second Circuit typically issues decisions several weeks or months after oral argument.

The oil pollution dispute is the subject of the 2009 film "Crude." The Second Circuit on July 15 ordered the filmmaker Joe Berlinger to turn over some raw footage to Chevron, which the company sought for its defense.

In a Tuesday filing in Manhattan federal court, Chevron said the outtakes show "collusion" between the residents’ lawyers and a court-appointed expert, Richard Cabrera, who estimated the potential $27.4 billion liability.