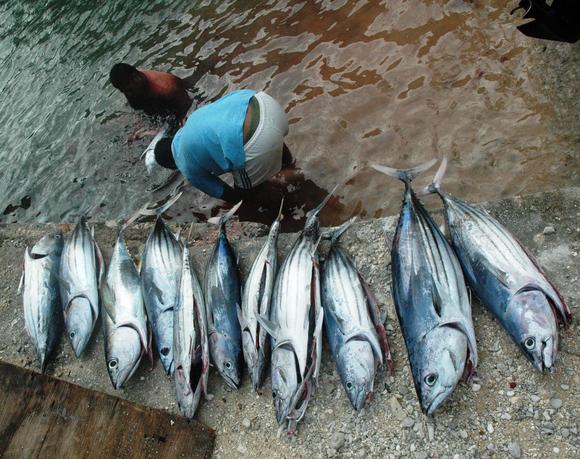 A catch of pole-caught skipjack tuna in Fakaofo, Tokelau (photo by Michael Field)

Fight for fish China elbowing US out of Pacific tuna trade

AUCKLAND, New Zealand — A political battle is brewing in the Pacific over tuna as rising competition from Chinese vessels sours long-standing fishing arrangements between the U.S. and Pacific island nations.

After lengthy negotiations, the U.S. reached an interim agreement in August to raise its payments to a group of Pacific nations for access to tuna stocks in their exclusive economic zones for 2016. However, regional fishing authorities remain lukewarm about the long-term future of the arrangement, believing that China is prepared to pay more.

The U.S. has extended the 1987 South Pacific Tuna Treaty annually since 2013, but it has failed repeatedly to reach a new long-term agreement with the Pacific island nations. The result was the same at recent talks in Brisbane, Australia, on Aug. 5. Washington has now threatened not to extend the treaty after 2016. Yet despite such hard talk, the U.S. may have to return to the negotiating table as world tuna stocks fall and prices spiral higher.

The interim treaty requires that each of 37 U.S.-registered purse seine, or dragnet, vessels that are registered to fish in the Pacific nations’ exclusive economic zones pay a "vessel day scheme" rate of $12,600 a day in 2016, 34% more than this year’s day rate. U.S. vessels will be allowed up to 5,700 fishing days, down from this year’s allotment of 8,300. Purse seine vessels target skipjack tuna, the species most favored for canning.

The trade is largely controlled by a group called the Parties to the Nauru Agreement, which comprises the Federated States of Micronesia, Kiribati, the Marshall Islands, Nauru, Palau, Papua New Guinea, the Solomon Islands and Tuvalu.

The PNA said the reduction in daily permits would help to conserve 50% of the world’s sustainable tuna stocks. But market observers have pointed out that group members are being lured by offers of higher prices from Chinese fishing groups.

Ruth Matagi-Tofiga, a member of the Western Pacific Regional Fishery Management Council, a consultative body established under U.S. law, echoed industry resentment about the actions of the PNA. She said PNA members were using conservation as an excuse for taking "more lucrative offers."

A diplomatic official involved in the tuna trade told the Nikkei Asian Review that Papua New Guinea had sold some daily permits at $12,000 each to Chinese fishery groups, and that other distant-water fishing nations were also paying significantly more than the benchmark price set in the treaty.

Kiribati is refusing to sell fishing days to the U.S. because it is getting more from the Chinese groups, whose government offers aid and subsidies to the industry. The relationship between the PNA and the Chinese is shrouded in secrecy and payment levels are not officially disclosed.

A former official of a multinational regulatory body, who is now involved in the tuna market, said the best way forward would be to adopt an open-market policy and allow competing nations to bid for fishing days, which would "start a real market and trading."

He added, "The Pacific needs to sell fewer days at a higher price and keep the fish stocks strong."

According to Transform Aqorau, chief executive of the PNA, the group has begun selling some fishing days by tender this year in addition to the deal with the U.S., and has received higher values. Aqorau said this showed that the waters were "increasingly valuable and competitive."

J. Douglas Hines, executive director of California-based South Pacific Tuna, which represents a fleet of 14 U.S. purse seines, expressed disappointment that the U.S. and the Pacific nations had failed to reach a longer-term agreement, saying he hoped the PNA would recognize "the contribution of the U.S. as its important ally and work towards a resolution."

Some in the Pacific nations argue that profits from tuna fishing have far exceeded payments by U.S. companies and claim that it is time for profits to be shared more equally.

"[The U.S.] had been used to sending fisheries teams to island capitals once a year to negotiate license fees, which historically paid just pennies compared to the profits reaped by the fishing countries," writes Giff Johnson in his new book "Idyllic No More: Pacific Island Climate, Corruption and Development Dilemmas."

China is already dominating tuna fishing in the open ocean outside the Pacific nations’ exclusive economic zones. And it has the capacity to expand its reach in the region.

The Western and Central Pacific Fisheries Commission, which administers an international convention among Pacific nations with fishing grounds and countries sending fishing fleets, said China has 669 vessels authorized to fish in the high seas, including 11 purse seine vessels. The commission said the U.S. has 214, including 40 purse seine vessels.

Another industry group, the Pacific Islands Forum Fisheries Agency, said that 297 Chinese vessels, including 18 purse seine vessels, were authorized to fish within the exclusive economic zones. The agency, based in the Solomon Islands, said the U.S. had 38 vessels, all purse seines. Some boats are licensed to fish in both the open ocean and exclusive economic zones, which can lead to some inconsistencies in reported figures.

James Movick, director general of the agency, said 100 new Chinese boats had come into the region in the last three years, mostly large super-frozen long-line vessels, which are more efficient at catching tuna and processing it on board. Movick said the construction, financing and operating costs of these vessels were subsidized by Beijing, which allowed them to operate in circumstances in which other vessels would not be viable.

"We’ve encouraged them to work with the Pacific island countries ... and bring some of the benefits to [them]," said Movick.

With competition already high, U.S. boats have not been helped by a squeeze on tuna stocks due to conservation efforts. In June, Washington closed U.S. Pacific waters to purse seine vessels. President Barack Obama has also banned trawlers in a newly expanded area in a remote region of the U.S. Pacific islands.

In addition, the Western and Central Pacific Fisheries Commission has banned for four months the use of fish aggregating devices — buoys or floats tethered to the ocean floor that attract pelagic fish such as skipjack.

"Fears are rife also that the El Nino phenomenon may have an impact on catches," the PNA warned. El Nino, the name given to intermittent changes in Pacific temperatures, is thought to be heating up the central Pacific, attracting tuna away from their usual fishing grounds.

With all these factors at play, skipjack tuna prices at the benchmark Bangkok market leapt 50% to $1,500 per metric ton at the end of July from May. In Ecuador, skipjack was selling at $1,450 per ton.

While that price is still lower than the record $2,300 set in mid-2013, it is expected to move higher. In a PNA market update on Sept. 1, the group said Bangkok market insiders report skipjack prices are remaining at the $1,500 high "as scarcity continues to influence demand."