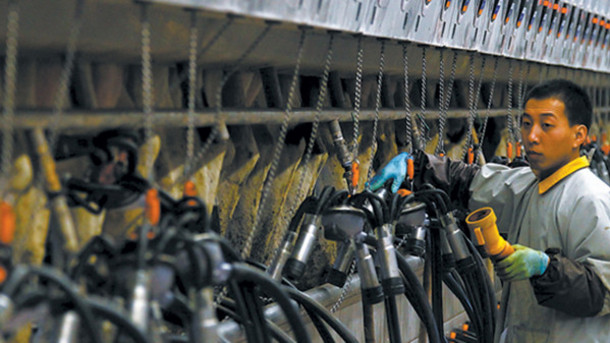 Chinese dairy farmers fear their government is sacrificing the local industry to promote trade with Australia.

Australia and China finalised the terms of a free trade agreement in December and expect it will come into force later this year.

The agreement will see China eliminate import tariffs on about 95 per cent of Australian products coming into the mainland including dairy, beef, wine, seafood and horticultural products.

In China, the dairy sector is furious.

Dr Shen Giuyin, from China’s Ministry of Agriculture, declined requests for a recorded interview but told Australian journalists, through a translator, that farmers believed their government was sacrificing their industry for trade with Australia.

"When the free trade agreement is signed, we expect to import a lot of dairy products from Australia.

"I think China is sacrificing the dairy sector to promote free trade."

Earlier this year, there were reports farmers were pouring out up to a tonne of milk each day and slaughtering cattle because they had nowhere to sell their products.

They now fear the situation will become worse once the FTA takes action.

China and Australia agreed on the terms of the FTA late last year.

Embassy officials say the agreement is being "scrubbed", that is, when lawyers from Australia’s trade department and China’s ministry of commerce go through the agreement point-by-point to ensure it is legal.

The 1,500-page document will then be translated into Mandarin, a process that takes between three and six months.

Officials on both sides expect the FTA will be officially ratified in the second half of this year.

Once in force, tariffs on a range of Australian commodities coming into China will be phased out.

Dairy tariffs will be completely eliminated over four to 11 years.

China imports about 20 per cent of the milk its citizens consume.

While Dr Shen did not expect a drastic increase in total dairy imports, he tipped Australia’s contribution would potentially increase at New Zealand’s expense.

"After the free trade agreement is signed, we expect China’s dairy industry is going to suffer a lot," he said.

"Your dairy producers are more competitive than China’s.

"You have better lands and most of the cows are free range, they eat the grass and it is very cheap.

"Here in China it is so expensive. It is already pushing up the prices."

Walk into a small supermarket in inner city Beijing and Australia’s presence is clear.

In the fridge, there is an array of long life milks. Sitting on the bottom shelf is a bright green one-litre carton of Devondale milk.

It is a product that has come from Murray Goulburn, Australia’s largest dairy processor. On the side of the carton it says it was manufactured in Leongatha, in Gippsland in eastern Victoria.

It is clearly more expensive than its locally produced competitor.

At the higher end, there are reports of fresh Australian milk selling for up to $12 a litre in both Beijing and Shanghai.

It is a sight many expect to see more of, as this Australian dairy invasion enters a boom time.