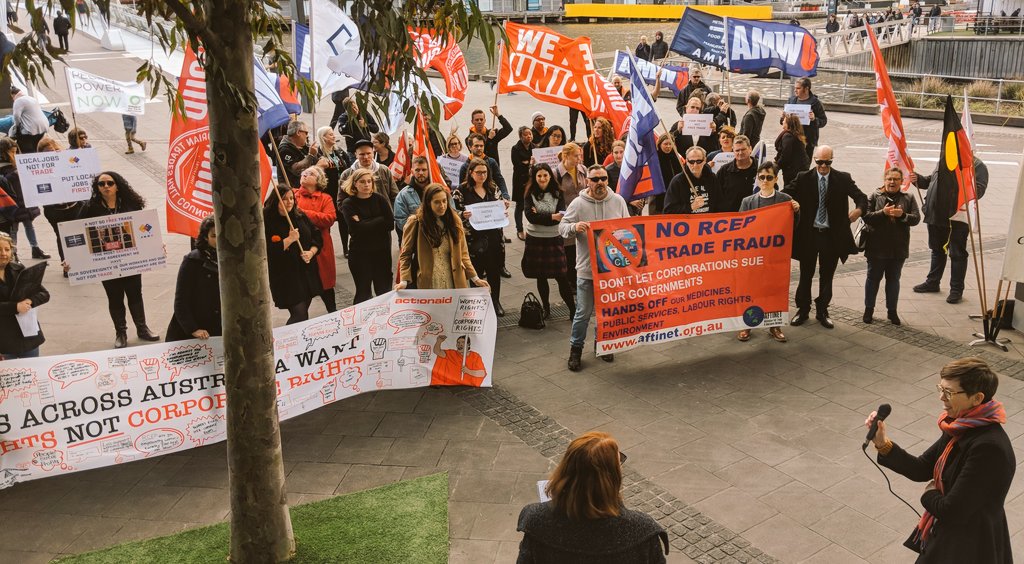 As world leaders gathered in Osaka, Japan, for the 2019 G-20 summit, the 26th round of negotiations for the Regional Comprehensive Economic Partnership quietly took place in Melbourne, Australia, between June 28-July 3.

RCEP, a proposed free trade agreement between the 10 member states of the Association of Southeast Asian Nations, or ASEAN, and the six Indo-Pacific countries ASEAN nations have existing free trade agreements with — Australia, China, India, Japan, New Zealand, and South Korea — has been shrouded in secrecy since negotiations began in 2013.

““There is a lot of secrecy around RCEP despite the fact that it will cover 16 countries and almost half the population of the world.””— Thuy Nguyen Phuong, policy and campaigns manager, ActionAid Vietnam

It is promoted as having the “potential to deliver significant opportunities for businesses in the East Asia region” by lowering trade barriers and securing improved market access for member countries according to ASEAN.

To date, civil society organizations and other observers of the trade agreement have needed to rely onleaked 2015 documents to get a picture of what was on the table for discussion and whether there were protections offered to vulnerable communities and the environment. The documents raised red flags with members of civil society Devex spoke to, who cited its lack of regulations to support environmental and social needs.

“RCEP looks like a race to the bottom,” Sam Cossar-Gilbert, international program coordinator at Friends of the Earth International, told Devex.

With pressure increasing for negotiations to be concluded by November as countries raise concern of the impact of a China-United States trade war, civil society is ramping up action to increase awareness of potential impacts and its process of engaging community groups, which CSOs consider simply “tick-in-the-box” rather than serious discussions.

“There is a lot of secrecy around RCEP despite the fact that it will cover 16 countries and almost half the population of the world,” Thuy Nguyen Phuong, policy and campaigns manager at ActionAid Vietnam, explained to Devex. “We will not find out the final text of the deal until it has already been signed by all countries.”

In Melbourne, select CSOs were invited along with business representatives to submit a proposal to present issues of concern to lead negotiators in mid-June. Organizations were given between one-five days notice by the Department of Foreign Affairs and Trade that they were invited to speak on June 30 within a 90-minute window.

A listing of the presentations provided to Devex showed a diverse range of issues being communicated — including investor-state dispute settlement; health; intellectual property related to medicines, e-commerce, and copyright; gender impact; and the implications on public services.

Deborah Gleeson, a senior lecturer in public health at La Trobe University, raised concerns with negotiators that RCEP could extend monopolies on medicines and delay access to cheaper generic medicines — with a devastating impact on low-income countries reliant on generic medicines.

Patricia Ranald, convenor of the Australian Fair Trade and Investment Network, presented new information on the impact of ISDS showing that although Australia won their dispute with the Philip Morris tobacco company on Australia’s plain packaging, Australia was only awarded half of its legal costs. She warned that RCEP could see more of this type of legal actions costing signatory governments.

“Even if governments win, they lose,” she told Devex. “These tribunals don’t behave the same way as national courts.”

Nguyen Phuong presented concerns of the impact on women through a short video on gender and trade in Vietnam.

“Vietnam lacks budget for gender-responsive public services, meaning women often have to stay at home to take care of their children due to lack of kindergartens. Fair tax will help the Vietnamese government to cover the budget of public services and create more chances for women to do paid work and decrease the gender gap,” she explained.

“For this there should be a chapter on gender in RCEP to ensure not only women’s rights but human rights.”

But the negotiators gave nothing away in their responses.

“We don’t get any detailed information about what is being discussed,” Ranald said. “That’s why we’re continually asking that the text be made public and — before it is signed — subjected to an independent assessment of economic, environmental, health and gender impacts.”

Combined with the limited time frame for presentations or pitches, CSOs were not convinced that their voices were being heard.

“It was a ticking the box exercise,” Clare Middlemas, national campaigns manager at the Community and Public Sector Union, explained to Devex.

Middlemas, who attended the round of negotiations in Thailand last October, said the setup was similar but expected better from Australia.

Devex raised the concerns of civil society with DFAT and asked for a response to a range of questions. They included requesting the agenda for discussions, a list of organizations and individuals invited to the stakeholder engagement session, confirmation on whether the business sector was provided additional opportunity to engage with negotiators, the function of stakeholder engagement within the schedule, and whether this has been shown to influence discussions.

In response, Devex received a statement from the Minister for Trade, Tourism and Investment Simon Birmingham highlighting his view on the value of RCEP.

“RCEP would be one of the most economically significant trade agreements in the world, bringing together the ten ASEAN nations and other economic powerhouses including China, India and Japan,” he said.

He identified the importance of ISDS provisions, which have existed for over 30 years in Australia’s investment and trade agreements, in providing Australian businesses with legal safeguards while investing internationally and said his government would continue to engage with Australian industry and the wider community on this deal.

But any information on the agreement would not be forthcoming.

Working together to raise awareness

With no insight into whether the concerns of civil society are being seriously considered as part of RCEP negotiations, CSOs are assuming the worst.

“It’s an affront to our democracy to think that our governments are signing up to these agreements and our Parliament doesn’t even get to see these texts before they are finalized,” Middlemas said.

Organizations are joining forces to build awareness on this trade agreement, which could be concluded within the next 12 months.

“Many organizations are working together to raise civil society concerns around RCEP,” Nguyen Phuong said. “We hope that when we all raise our voice on the same issues, the chief negotiators from each country will consider our recommendations in their negotiations.”