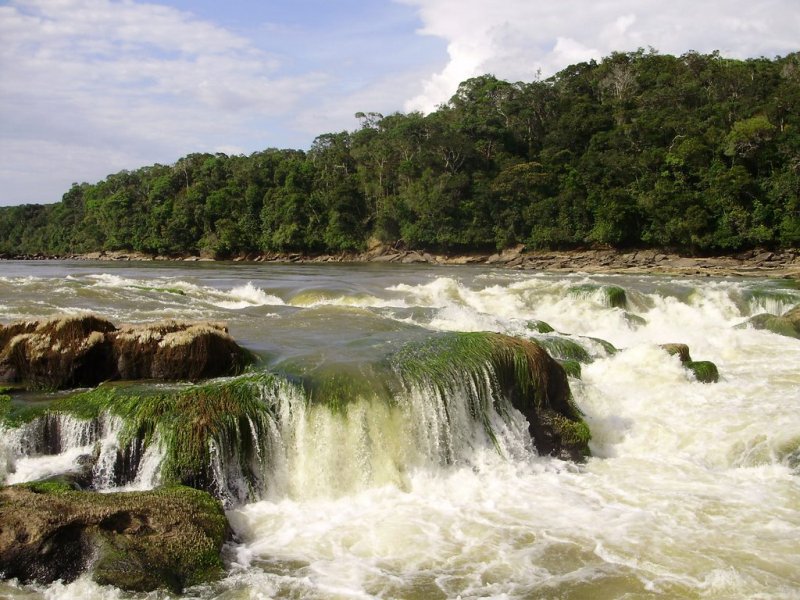 Colombia : there’s no place for clean water under ’free trade’

The latest country to be hooked under ’free trade’ agreements is Colombia, writes Pete Dolack, sued for tens of billions of dollars by US and Canadian gold mining companies for valuing its national parks and the high-altitude Andean wetlands that provide 70% of the nation’s water above the profits of foreign corporations. Free trade or clean water ? You can’t have both.

Yet another standoff between clean drinking water and mining profits has taken shape in Colombia.

Two corporations are insisting their right to pollute trumps human health and the environment. As is customary in these cases, it is clean water that is the underdog here.

Two million people are dependent on water from a high-altitude wetlands, which is also a refuge for endangered species, that a Canadian mining company, Eco Oro Minerals Corporation, wants to use for a gold mine.

The wetlands, the Santurbán páramo in the Andes, has been declared off-limits for mining by Colombia’s highest court due to the area’s environmental sensitivity. Eco Oro is suing the Colombian government because of this under the Canada-Colombia Free Trade Agreement.

The dispute will likely be heard by a secret tribunal that is an arm of the World Bank, even though the World Bank has provided investment capital for Eco Oro to develop the mine.

Eco Oro has not said how much money it intends to ask for, but another mining company, the US-based Tobie Mining and Energy Inc., has separately sued Colombia for US$16.5 billion because the government refused to allow it to establish a gold mine in a national park.

To put that $16.5 billion in perspective, the total represents more than 20% of Colombia’s budget.

El Salvador in $301 gold mine claim

To the north, El Salvador is still awaiting the decision of another secret tribunal in a case heard in September 2014. An Australian mining company, OceanaGold, sued El Salvador for $301 million because it was denied a permit to create a gold mine that would have poisoned the country’s biggest source of water.

Under ’free trade’ agreements (which have little to do with trade and much to do with enhancing corporate power), governments agree to the mandatory use of ’investor-state dispute mechanisms.’

What that bland-sounding phrase means is that any ’investor’ can sue a signatory government to overturn any law or regulation it does not like because the law or regulation ’confiscates’ its expected profits, with no limitations on who or what constitutes an ’investment’.

These cases are not heard in regular judicial systems, but rather in secret tribunals with no oversight, no public notice and no appeals. The judges who sit on these tribunals are corporate lawyers whose regular practice is representing corporations in these types of disputes.

In the latest Colombian case, that of Eco Oro Minerals, the company sued one month after the Constitutional Court of Colombia ruled that a government plan to permit mining in some portions of the country’s sensitive high-altitude wetlands is unconstitutional.

Eco Oro’s original plan was for an open-pit mine, which was denied by the environmental ministry thanks to an organized campaign by environmentalists. Denied a permit, Eco Oro then began plans for an underground mine, and received $16.8 million in financing from the World Bank to fund a new study.

The environmental ministry subsequently declared the area a protected region, rendering illegal any mine. The final chance to open a mine was ended when the Constitutional Court ruled in February 2016.

The mining company has declared Colombia "in breach" of its obligations and notified Bogotá of its intention to sue if a negotiated settlement can’t be reached. Eco Oro issued a public statement that said, in part :

"The dispute has arisen out of the Government’s measures and omissions, which have directly impacted the rights granted to Eco Oro to explore and exploit its Angostura Project. The measures and omissions that have affected Eco Oro include (without limitation) the Government’s unreasonable delay in clarifying the limits of the Santurbán Páramo and whether it overlapped with the Angostura Project and its persistent failure to provide clarity as to Eco Oro’s right to continue developing its mining project in light of further undefined requirements and later as a consequence of the Constitutional Court’s decision of February 8, 2016, which has broadened the prohibition of mining activities in páramo areas."

To use more direct language, the company declares it should be allowed to destroy environments for unlimited profit-making. Colombia’s high-altitude wetlands provide 70% of the country’s fresh water, so protecting them is hardly unreasonable.

Giving with one hand, taking with the other

"[W]hile vast sums of Western taxpayer funds are pouring into Colombia to encourage it to protect its environment, Western corporations - with full backing from the World Bank - are doing all they can to prevent the government from safeguarding its environment, including the water supply its people depend on."

Earlier this month, the World Bank declared it would make a "fundamental shift" by now diverting money to projects that will ameliorate global warming, and claiming that all its future investments would take climate change into account.

Disbelief would be justified here, considering the World Bank’s record of financing massive projects that pollute and contribute greatly to global warming, and that the bank, in 2012, issued a report sounding an alarm against global warming to no noticeable effect.

But that World Bank report was a feat of monumental hypocrisy, and not simply because it called for shifting of money toward ’green capitalism’ initiatives - in other words, the same runaway train that has brought the world to the brink of catastrophic global warming is supposed to now magically save the world.

The World Bank has provided billions of dollars to finance new coal plants around the world in the recent years and repeatedly has provided capital to make possible dams and energy projects that have displaced large numbers of people and disrupted ecosystems.

The other case filed against Colombia, by the US mining company Tobie Mining and Energy, claims that the country’s government has "expropriated" its investment and that the creating a national park is "fraudulent".

Tobie claims that the Colombian government (then headed by hard-right authoritarian Álvaro Uribe, whom the company extravagantly praises on its web site) granted approval for its proposed mine in 2008, but before a final agreement could be reached, a national park was created, blocking the mine.

Tobie demands $16.5 billion or to be allowed to go ahead with its gold mine, but does not explain how it calculates what it claims to be the "fair value" of the mining concession. The entire value of all gold exported from Colombia in 2014 (latest figures available) was $1.4 billion, according to the World Bank - considerably less than the value of coffee exported.

The value of Eco Oro’s disallowed mine is also subject to question, as a Canadian Parliament report on trade estimates the value of Colombian "energy and other" products imported to Canada to be C$280 million.

The World Bank secret tribunal that will hear Eco Oro’s suit against Colombia (formally known as the International Centre for Settlement of Investment Disputes, or ICSID) has a long history of one-sided, pro-corporate rulings.

The latest of these, on April 4, was a decision that Venezuela must pay the Canadian mining company Crystallex International US$1.4 billion for denying a permit on environmental grounds. The area Crystallex wanted to mine is one of only four pristine forests in Venezuela and home to several Indigenous peoples.

Among other decisions handed down,

Canada was forced to reverse its ban of the gasoline additive MMT and pay compensation to a US chemical company ;

Mexico was forced to grant a permit to a US metal company that wanted to site an environmentally dangerous waste dump and pay compensation ;

and Canada was required to reverse a transport ban on PCBs that had conformed to environmental treaties.

In this last case, for good measure, the secret tribunal ruled that, when formulating an environmental rule, a government "is obliged to adopt the alternative that is most consistent with open trade." That last ruling provides the essence of ’free trade’ agreements - the accumulation of corporate power to override all democratic controls over health, safety, environmental or labor safeguards.

And as awful as these decisions are, worse is what would await us should the Trans-Pacific or Transatlantic partnerships go through as those agreements promise even more draconian rules than the ones already in place.