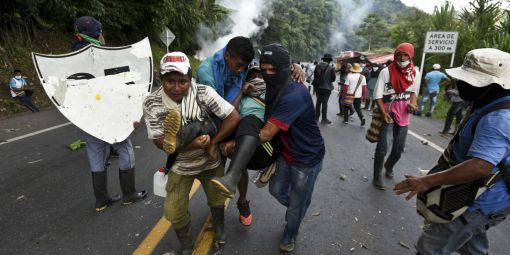 Colombia’s campesinos remain mobilized days after they ended a two-week national strike, launching a campaign on Saturday calling for a referendum amend the country’s constitution in order to better protect their rights.

The modifications seek to protect national agricultural production, prioritizing it over food imports; to guarantee rural men and women access to water; and to review fre -trade deals agreed to during the administration of President Juan Manuel Santos, among other demands, according to a spokesperson for Dignidad Agropecuaria, Francisco Alvarado.

“We hold free trade agreements responsible for the bankruptcy of small producers, and we want them renegotiated,” he told Contagio Radio.

They are also demanding the state to guarantee access to credit and limit the appropriation and the use of land by foreigners, while assigning Colombia’s campesinos the duty to preserve biodiversity on their territories.

“The campesinos were pretty much excluded from the constitution,” Alvarado told local media, “so we just wish to have recognized the fundamental rights of rural communities.”

To go forward with the referendum, submitted to electoral authorities on May 12, the campesinos will need to gather 4.5 million signatures within the next six months before the Congress can then start debating the amendments to the constitution. Supporters plan to visit about 900 towns across the country to do just that.

Earlier this month, up to 70,000 small producers—many of them Afro-Colombians and indigenous—conducted a two-week national strike with similar demands. Called “Minga Agraria, Etnica y Popular,” the strike ended ending June 12 after the government said it would seriously take into account the campesinos’ demands in further negotiations.

The campesinos movements staged two national strikes in 2013 and 2014, the product of a deep crisis in Colombian agriculture, recognized even by the United Nations, guarantor of the negotiation process with the government. According to the organizing movements, less than 70 percent of the over 200 agreements reached with the government since 2013 have been met, the state instead implementing policies that harm their interests.

Under the governments of Alvaro Uribe and Juan Manuel Santos, agriculture in Colombia has been heavily oriented toward exportation and the use of pesticides and fertilizers, forcing farmers into debt to remain competitive in the world market.

Santos’ policies have favored large agribusiness, forcing campesinos to abandon their lands and sell their labor. Trade agreements with Europe and North America have resulted in the selling of cheaper foreign products in Colombia—often state-subsidized—disadvantaging local producers, activists say.