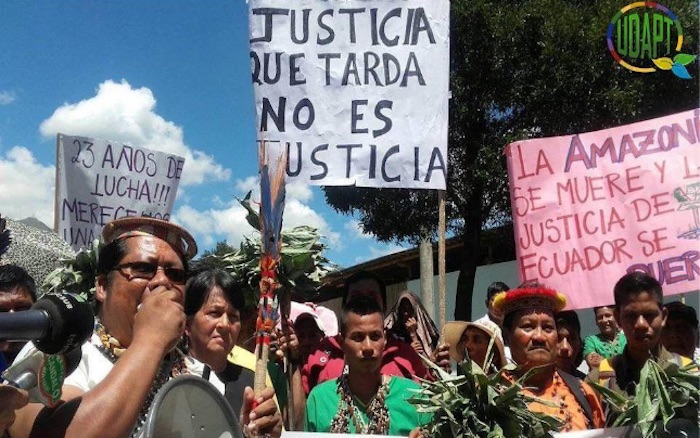 LAGO AGRIO, February 2021 - On February 14, 2011, the president of the Provincial Court of Justice of Sucumbíos issued the first judgement against the oil company Chevron (formerly Texaco). For the Union of People Affected by Texaco’s Oil Operations in Ecuador (UDAPT), this was a historic day. After more than 18 years of litigation, having accumulated more than 200,000 pages of trial documents, 80,000 results of water and sediment analysis, 106 expert reports; that is to say, an overwhelming proof that demonstrated the crime committed by the oil company and that more than 30,000 people, belonging to eight Indigenous Peoples and Nationalities (Cofán, Kichwa, Siekopai, Siona, Shuar, Waorani) and several peasant communities, were right in their claims. This evidence was decisive for the judge to adopt his decision and order the company to pay a sum of more than 9.5 billion US-dollars to repair the damage caused its oil operations.

This verdict was ratified by all the judicial instances in Ecuador, including the Constitutional Court of Ecuador, which issued its unappealable and imprescriptible ruling in June 2018, putting an end to the litigation in Ecuador. "We have achieved justice", declared Justino Piaguaje, president of the Siekopai, plaintiff and leader of the UDAPT.

However, 10 years have passed since the judgment of Lago Agrio. Until today the oil company refuses to comply with the judgement; and, in turn, has chosen to activate a whole system that guarantees corporate impunity. Part of these actions are three international arbitrations that Chevron has filed against the Ecuadorian State. Only two months after the ruling of the Constitutional court, in August 31, 2018, Chevron obtained an arbitration award favorable to the transnational oil corporation that among other things provides that the Government of Ecuador take all necessary actions to achieve the nullity of the Lago Agrio judgment, in addition to preventing the plaintiffs of the Lago Agrio case to carry out the execution of the judgment outside Ecuador. This award was widely condemned by international civil society. More than 260 organizations, networks, unions worldwide representing more than 280 millions members have declared that this award violates the human rights of more than 30 thousand people and that it is unconstitutional and cannot be enforced in Ecuador.

"The Chevron case in Ecuador is one of the most emblematic cases that reflects the impunity of transnational corporations in the world. Chevron not only refuses to recognize the Ecuadorian judgment, but also activates the ISDS system and abuses it to perpetuate impunity. This company takes advantage of the lack of international norms and laws or a binding treaty; therefore, those affected anywhere in the world are prevented from having access to a real international Court of Justice and force the oil company to pay for these crimes," said Pablo Fajardo, the UDAPT lawyer. It is repudiatory that the Government of Lenin Moreno, instead of protecting the rights to reparation of those affected in the Amazon, complies with an arbitration award, which undermines the sovereignty of the country. This fact is aggravated by allowing the Chevron case to be part of the negotiations prior to the agreement with the IMF (International Monetary Fund), opening the way for the payment of millions of dollars in compensation to Chevron with a loan from the IMF to Ecuador.

All these facts have led the UDAPT to strengthen and expand its struggle around the world.There is a firm conviction among those affected that they will not abandon this battle until they achieve full reparation of the damage. This is a fight for the common good, for our future generations. It is not for money, it is for life. Therefore we will not give up until we ensure that we fulfill our duty to future generations, said Donald Moncayo, leader of UDAPT.

Chevron is one of the major polluters of the planet and has been declared as the most opaque company in the world, not only for the environmental disasters that are attributed to it, but also for the creation of dozens of subsidiaries in tax havens, to evade taxes and try to escape justice. The struggle of affected people uncovers the international justice system. It is clear that it is not built to protect the rights of those affected or the Rights of Nature, that it does not guarantee legal security for those affected. It is conceived to protect transnational corporations.

We are aware that we cannot fight alone. We must globalize our struggle. In this process, we have joined an international campaign to elaborate with hundreds of organizations a Binding Treaty on Transnational Corporations to respect human rights which is currently under discussion at the United Nations. We also participate in an international campaign against Investor State dispute settlements (ISDS) which put the interests of transnational corporations above human rights. In September 2020, a Dutch court issued a first instance ruling in favor of Chevron and against the Ecuadorian State. Although as affected people we are not part of this judicial process, it is intended to affect our human rights. Thanls to the support of more than 240 organizations representing more than 285 million members worldwide, we obtained that the Ecuadorian State continues with its action to nullify the arbitration award before the Dutch courts. Unfortunately so far, the State has not given us any information about the content or the results of this action.

After 27 years of struggle, the Lago Agrio judgment is fully in force and unappealable. We will continue our battle. We are not alone, we will continue to join forces, struggles and peoples around the world until we achieve access to justice, concluded Willian Lucitante, Executive Coordinator of UDAPT.

To view all formatting (hyperlinks, tables, etc.), please read on its original page