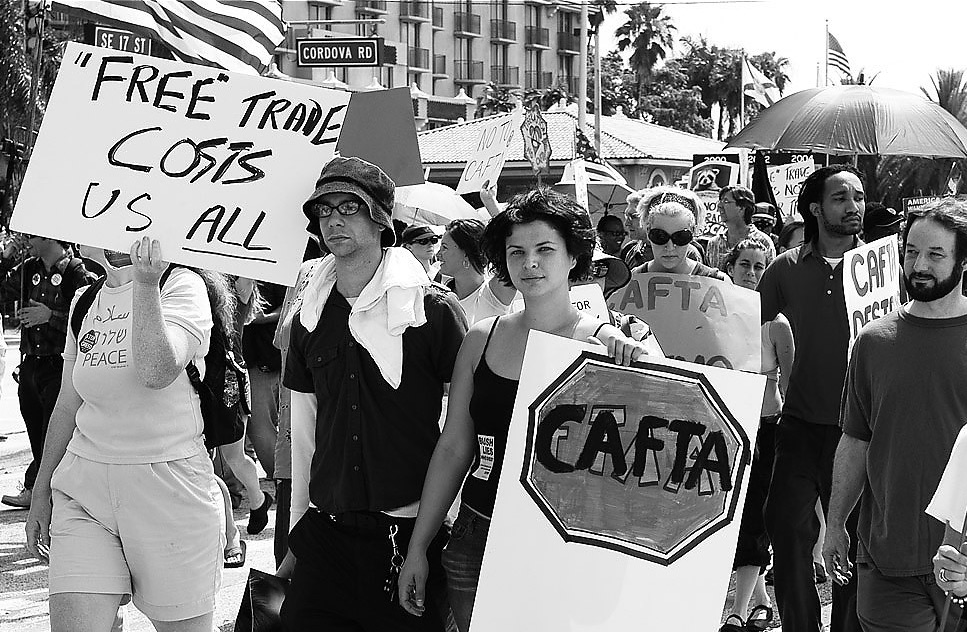 Corporate power and abuse is a root cause of migration

During U.S. Vice President Kamala Harris’s recent visit to Guatemala, where she urged Central Americans “not to come” to her country, she also emphasized that the migration problem must be attacked at its “root causes,” which have become a central theme of the Biden administration’s approach to the region. While it is key to address the structural causes that lead thousands of people to flee their countries of origin, the concept has been co-opted to elude the United States’ responsibility for the economic and social crisis faced by the Northern Triangle of Central America (El Salvador, Guatemala, and Honduras). Blaming poverty and violence implies attacking the symptoms while disregarding the root causes. For decades, the United States has empowered those countries’ governments and plutocracies, overthrowing democratically-elected governments. Additionally, it has imposed a “free trade” model that mostly benefits U.S. corporations whose activities bring about dispossession and provoke forced migration.

In recent months, several U.S. initiatives have been announced to support Central America. In April, Harris reported that the United States was providing $310 million in humanitarian support for Guatemala, El Salvador, and Honduras. According to its budget proposal tabled at the U.S. Congress, the Biden administration is requesting $861 million for the next fiscal year to support Central America, as part of its $4 billion plan for the region over four years, in line with its strategy to address migration. It is a significant amount of money.

However, while the Biden administration may feel generous toward Central America, one Nevada mining company alone—Kappes Cassidy & Associates (KCA)—is suing Guatemala for $400 million at the World Bank’s International Centre for Settlement of Investment Disputes. KCA argues that the Guatemalan government failed to protect its mine from the frontline communities’ sit-in at La Puya. Activists are protesting the contamination of their scarce water resources as a result of mining activities. Central American countries face many similar multimillion-dollar lawsuits or are placed before a constant threat under CAFTA’s Chapter 10 investment protection.

The granting of privileges and the straitjacket caused by free trade agreements (FTA) cause the destruction of livelihoods and the violent expulsion of rural and indigenous communities throughout Mesoamerica ; Mexico, for instance, is being sued under NAFTA for a staggering $4.54 billion by three mining companies under NAFTA. The FTAs’ Investor-State Dispute Settlement System (ISDS) enables corporations to sue governments and challenge the policies they adopt to protect the environment—water being a recurrent issue—in response to social struggles, and often won at the cost of many lives. ISDS is a neocolonial instrument used to discipline and punish governments, which safeguards the transnational corporations’ interests and their expected profits. Latin American countries have been the main targets of suits by extractive companies.

But governments are not the sole victims of supranational lawsuits. The Business & Human Rights Resource Centre has documented how environmental and natural resource defenders face powerful vested interests which seek to silence them. Strategic Lawsuits Against Public Participation (SLAPPs) are a tactic used by companies to stop those who oppose their business activities. SLAPPs can take the form of criminal or civil lawsuits brought to intimidate, deter, bankrupt, and silence critics. At least 39% of the 3,100 SLAPPs recorded between January 2015 and May 2021 occurred in Latin America, making it the region with the highest number of such attacks.

Honduras, with 46 cases, has the second-highest number of SLAPPs among countries worldwide. A key case in that country involves four Garífuna women leaders of the Black Fraternal Organization of Honduras (OFRANEH). These women were accused of libel and slander by a hotel company and have been facing criminal charges since 2017 for defending Garífuna ancestral land from transnational companies’ tourism projects. Another example from Honduras is that of the eight community leaders from Guapinol arbitrarily imprisoned for almost two years now, for defending their water resources against the Los Pinares mining project, associated with U.S. capital. In February 2021, the U.N. Working Group on Arbitrary Detention urged the Honduran Government to immediately release the defenders from prison.

To seriously address the roots and causes of migration, it is urgent to dismantle the neoliberal rules which grant excessive privileges to transnational corporations and champion business activities that destroy livelihoods and generate violence (the main topic of part 2 of this article).