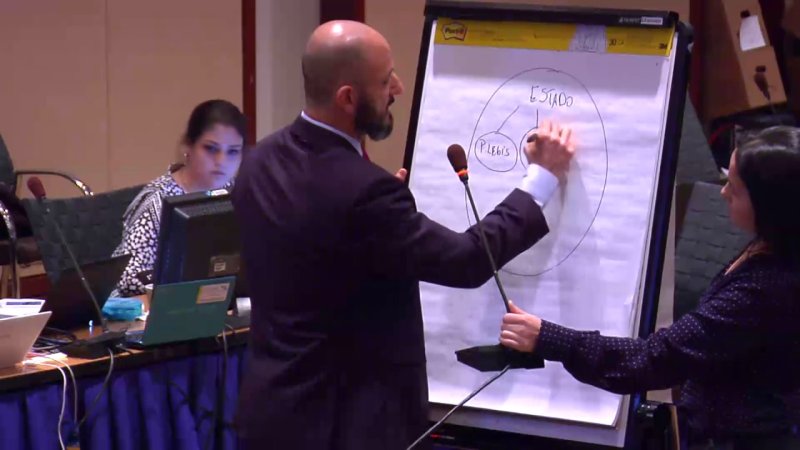 The CAFTA case is David Aven et el vs the Republic of Costa Rica, ICSID Case No. UNCT/15/3, a real David and Goliath ’story. The videos and information on this page are from the CAFTA Arbitration hearing held in Washington, DC on December of 2016. Complete details on ITA Law website.

The arbitration panel was comprised of three renowned International attorneys. Mr. Eduardo Siqueiros, from Mexico City, selected the Chairman by ICSID Secretary, with agreement of Complainant and Respondent. Mr. Mark Baker, from Houston, Texas, selected by US Investors. (the Complainant) Mr. Pedro Nikken from Caracas, Venezuela, selected by Costa Rica. (the Respondent) A ruling is expected the first quarter of 2018.

My name is Nick Johnson. I’m an independent reporter from Los Angeles. I became interested in the above case, and the implication of Governmental corruption, upon learning about an assassination attempt, in Costa Rica, on the life of real estate developer, Mr. David Aven. There were allegations the Las Olas project was shut down because the US Investors refused to pay a bribe, which if true, is International corruption. Direct evidence presented at the hearing by Mr. Aven, and others, indicated a Rogue Criminal prosecutor, by the name of Luis Martinez, started an ill-founded criminal investigation against Mr. Aven, for violating wetlands.

It was ill-founded because the developer had received all the legal permits, including the SETENA Environmental Resolution which stated there were no wetlands and were nine months into infrastructure construction. That SETENA Resolution required, by law, that all public and private persons must comply with SETENA Resolutions findings. Further, all construction permits were issued and many reports by MIANE and SETENA filed from 2006-2010, all saying there were no wetlands. Evidence showed that Mr. Martinez ignored Costa Rica Law in refusing to comply with a number of SETENA resolution findings. Mr. Aven clearly stated at the hearing, "the problem was that none of the Government Functionaries including Mr. Martinez, MINAE, TAA the MUNCIPALIITY and Costa Rica Judges, followed their own law.

According to Mr. Aven, Mr. Martinez went rogue when he ignored objective evidence from INTA, a top Wetland authority agency, telling Mr. Aven he didn’t believe that report. Mr. Martinez then doubled down on his flagrant disregard of Costa Rica Law, by filing false criminal charges against Mr. Aven and Mr. Jovan Damjanac, the projects marketing director, for violating wetlands. This was done with no proof of a crime, or proof of intent to commit a crime. Mr. Martinez then tripled down in his "rogue-ness", by referring Mr. Aven to INTERPOL, knowing the crime alleged against Mr. Aven did not meet INTERPOL’S referral guidelines.

I state the above having read all submission documents, documentary evidence, and watching all six days of hearing videos that are posted on YouTube. I have personally interviewed a number of people involved in this case. The total time spent taking a deep dive into the facts and evidence was in excess of 300 hours. Based upon that deep dive, it appears to me there was "Government corruption" and abuse of the legal justice system. In disregarding the law, Mr. Martinez and other Government employees, were successful in the destruction of a multi-million-dollar resort project that could have been an economic boom for the Costa Ricans living in the area of the project. According to Mr. Aven, Mr. Martinez was directly responsible for bringing this multi-million dollar lawsuit down on the head of the Costa Rica Government..

Criminal prosecutors have great power, which they’re supposed to use fairly and judiciously. They have the power to arrest you, throw you in prison, without any proof you committed a crime, and hold you there up to a year, while they try to find provable evidence. Fortunately, that didn’t happen to Mr. Aven or Mr. Damjanac, but it has happened to many others. One being Pat Hundley, a US Citizen who owns Day Star Properties in Jaco Beach, which is 10 minutes from the Las Olas Project. Mr. Hundley was thrown into prison under Costa Rica’s “preventative detention” law, with no proof of a crime and held for nine months. No charges, no proof, no Habeas corpus, no way out. He was only released after paying over 1 million dollars, without admitting any wrong doing. Does that have a ring of Corruption? Does that have a ring of fair play? Does that have the ring of judicious behavior? We report, You Decide.

In Costa Rica, 18% of the prison population is made up of people being held under "preventive detention". The Human Rights Court has petitioned the Costa Rica Government to end this primitive and abusive practice of throwing people into prison without charging them with a crime and with no proof. Click on this link to read article, “Human Rights Commission Calls on Costa Rica to End Excessive Use of Preventive Detention”.

DISCLOSURE STATEMENT BY NICK JOHNSON: The Corruption Report is to make people aware of great damage caused by corruption, both Government and NON-Government. I have nothing to do with the Las Olas Project and have no personal interest in the outcome of this case. My only interest is in the truth and to report the the truth about corruption where I find it. I am dedicated to revealing the truth on my website, FaceBook page and YouTube Channel. My intent is to shine the light on corruption where I can, along with many others who are doing the same. Collectively our hope is that the light becomes bright enough to dispel the darkness of corruption, so it will stop. You can be part of that light by spreading the truth you learn and then share that truth with people in your internet community. Become a beacon of light in joining the many other lights shinning to rid the World of corruption! A journey of a thousand miles begins with a single step. Take the first step into the light NOW! Check out more on our website at CRBUZZ.com

Nestor Morea Testimony at CAFTA Hearing, No proof of a Crime