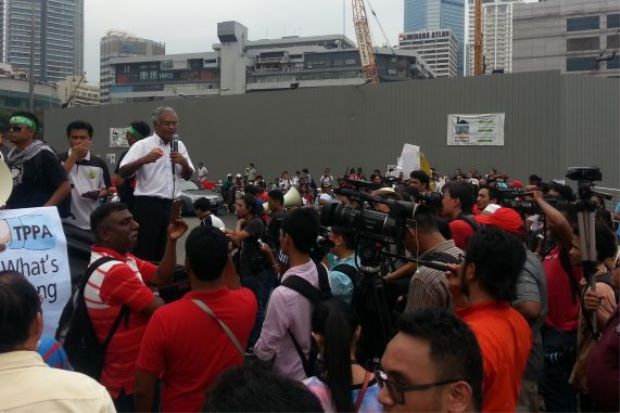 CPTPP nothing but a rebranding exercise

The Comprehensive and Progressive Agreement for Trans-Pacific Partnership (CPTPP) doesn’t add any benefits for the poor, terminally ill, women or even governments.

Rising from the ashes of the Trans-Pacific Partnership Agreement (TPPA), which was tanked by US President Donald Trump, the new trade deal will instead have serious implications on Malaysia.

This is why the Pakatan Harapan government needs to withdraw from ratifying the CPTPP.

However flowery the re-worded deal is, assuming it’s so as all past negotiations were carried out in secret and we are yet to see the new documents, the CPTPP is all out to seduce the US back to the negotiating table in the next few years.

The main change is that 20 provisions of the original pact, backed chiefly by the US, have been suspended.

The suspension and not removal of these regressive provisions is not a reason for celebration as they can be reinstated to please the US administration.

The CPTPP still requires the enforcement of patents, including on medication, that are significantly stronger than what the WTO’s TRIPS rules require (WTO-Plus). This would have adverse implications for access to medication.

This would also see the cost of life-saving medication skyrocket as a result of patent protections that safeguard the interests of large pharmaceutical companies at the expense of average Malaysian citizens.

The extended patent on new medicine would choke the entry of cheaper generic medicine, cutting short the lifeline of terminally ill Malaysians.

What would happen if the Malaysian government wanted to ensure that the poor continue to have access to affordable medicine as promised in its national medicines policy?

Chances are it would face a suit from a multinational pharmaceutical, under the Investor State Dispute Settlement (ISDS), which would say the move takes a hit on its profits.

The health ministry recently announced that it would provide a 12-week Egyptian generic treatment for Hepatitis C for the half million patients in the country.

Would this be allowed under the new trade deal or disallowed, requiring the government to pay the full RM360,000 per US patented treatment instead of RM1,300?

A striking example was when Swedish nuclear company, Vattenfall, took a case against Germany for pollution measures, and the German government settled and agreed to lower pollution controls rather than continue with the ISDS.

The Pakatan Harapan government’s ability to implement public policies to regulate public health, like plain packaging that acts as warning to smokers on cigarette packets, is also questionable as the tobacco company can drag it to a private arbitration.

No government wants to go through an ISDS as the outcomes of these claims are unpredictable, not to mention the stranglehold multinational corporations have over elected Parliaments and national courts.

As such, government decisions to regulate for human rights are influenced by the threat of an investor claim.

We were voted into power based on our reform agenda. Can we seriously keep our promises to the people with the constant threat to the sovereignty of the country hanging above our heads?

Pakatan Harapan’s move to improve labour standards and practises in the country, seen as vital to weeding out trafficking activities, could also land Malaysia in an ISDS if it is seen to have a negative impact on the value of investment.

The former Barisan Nasional-led government made a mockery of women’s contributions to progress by signing the CPTPP on International Women’s Day last year.

This is despite the fact that the trade agreement would promote labour competition and women’s low wages as a source of competitive advantage for corporations, besides threatening their access to public services through the reduction of tariffs that deprive governments of important revenue.

So, there is nothing progressive about the CPTPP except literally its name.

And even the bait of 1.2% GDP growth for the country doesn’t matter anymore, after Trump pulled the plug.

Wong Chen is MP for Subang, Nurul Izzah Anwar is MP for Permatang Pauh, and Charles Santiago is MP for Klang.