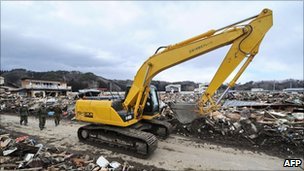 A worker operates the excavator during a clean-up operation in Tarou, north of Morika in Iwate prefecture. More trade with Europe could help fund the rebuilding in Japan, Mr Cameron said

The European Union (EU) should offer Japan a free trade deal to help it recover from the earthquake and tsunami two weeks ago, UK Prime Minister David Cameron has said.

"One of our priorities must be to invite Japan to enter into a free trade area with the EU," Mr Cameron said.

This would give Japan a trade boost and aid its economic recovery, he said following an EU summit in Brussels.

The Japanese government has estimated the rebuilding cost to be £192bn.

Mr Cameron said he had "secured a specific reference" to his proposal in the conclusions of EU documents.

The documents will be published later.

Earlier, the International Monetary Fund said it believed Japan’s economy was strong enough to afford the cost of rebuilding the damage from the earthquake and tsunami.

It said it expected a short-term drop in the economy, but no long-term impact.

"Despite the extensive damage we are of the view that the economic costs are manageable," said Ken Kang, the IMF’s Asia Pacific chief.

However, it said that power shutdowns would complicate Japan’s prospects.