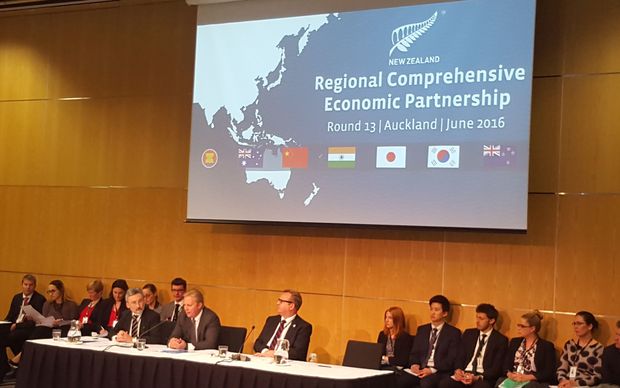 Negotiations to establish a massive Asian trade pact appear to be going backwards with some now questioning whether New Zealand should pull out.

The latest round in the Regional Comprehensive Economic Partnership (RCEP) took place in Singapore over the weekend.

It comes as a global trade war looms, with US president Donald Trump promising to slap high tariffs on imports of steel and aluminium.

"It’s been lumbering along for some time now and the deadlines keep getting readjusted.

"We’re coming to a crunch point about whether this agreement can in fact deliver some sort of ambition for trade and investment in the Asian region," Mr Jacobi said.

RCEP is made up of the 10 ASEAN nations, plus six other countries including New Zealand, China and India.

It covers three billion people with a combined national output of US$23 trillion ($F46.50t), accounting for 27 percent of global trade.

But after more than five years of talks to open up markets and standardise rules, patience is running out with RCEP.

"What we face at the moment is a real risk RCEP might deliver a lower level of ambition when it comes to market access as compared to other agreements like CPTPP," Mr Jacobi said.

Trade advocates want the deal to focus on eliminating most tariffs over time, just like the recently concluded Comprehensive and Progressive Trans Pacific Partnership (CPTPP).

"But if it delivers less, then one would have to wonder what the point of it was," Mr Jacobi said.

The current associate Minister for Trade and Export Growth, Damien O’Connor, is under no illusions the talks will be slow going.

However, Mr O’Connor said there was no intention of pulling out.

"This is a very significant trade deal once we can get it over the line. It’s 56 per cent of New Zealand’s goods and services. It’s seven of our top 10 export markets."

India is a key prize in a successful RCEP for New Zealand, but it is also a key stumbling block.

The country has roughly 75 million dairy farmers who have huge political clout, and the Special Agricultural Trade Envoy, Mike Petersen, said they were not making it easy to allow cheaper dairy imports.

"There is a history of India playing hard to get when it comes to trade agreements. Prime Minister Modi has said on a number of occasions that trade is not his priority."

But New Zealand has to be at the RCEP table according to Mr Petersen, as the costs of being left out are often far greater than the benefits of being in.

"Market access for agricultural products is always the most challenging issue and India is playing particularly hard on this issue. New Zealand’s access is very low at the moment and anything we can obtain is a big win for us."

The goal is to complete RCEP by the end of the year, though Mr O’Connor is doubtful that will be achieved.

India and US are ‘nearer to a smaller’ trade deal than ever before, says envoy Sandhu