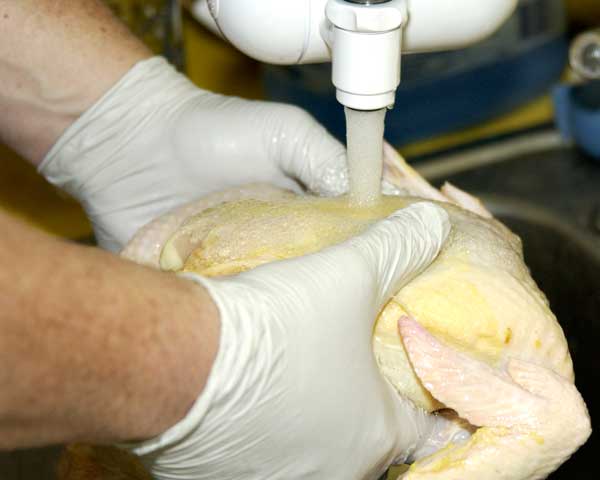 The death of a US federal poultry inspector, reported on April 25 in the Washington Post, shone a bright light on the high speed processed, chlorine rinsed chicken that the US wants to export not just to the EU, but globally.

Do you want a U.S. food safety standard with that chicken?

To export agricultural goods, the U.S. also exports food safety standards, or at least gets other countries to accept our way of growing raw materials and processing them into food as justified by standards “based on science.” The U.S. Department of Agriculture and the U.S. Trade Representative will soon see if the member governments of the Trans Pacific Partnership (TPP) and the Transatlantic Trade and Investment Partnership (TTIP) negotiations, launched by the Obama administration, will accept the way U.S. chicken processors butcher the bird. A National Chicken Council press release welcomed the launch of the TTIP negotiations: “When TTIP negotiations are successfully concluded, U.S. poultry producers look forward to marketing $500 million of products to the EU on an annual basis.”

The death of a U.S. federal poultry inspector, reported on April 25 in the Washington Post, shone a bright light on the high speed processed, chlorine rinsed chicken that the U.S. wants to export not just to the EU, but globally. The inspector, 37 year old José Navarro, worked for five years in the midst of a chemical spray that the USDA allows processors to use to decontaminate the feces on chickens that results from ever faster processing line speeds. Navarro’s lungs bled out. The U.S. Occupational Health and Safety Commission (OSHA) has not determined the cause of Navarro’s bleeding to death. An OSHA spokesperson said the agency was so understaffed, it would take 131 years to inspect every facility under its authority for worker safety violations.

Both the USDA and the National Chicken Council (NCC) defended the use of the poultry rinse, pointing out that the Food and Drug Administration had accepted the poultry industry’s claim that the rinse was Generally Recognized As Safe (GRAS). GRAS is only a food safety designation, not a worker safety rule. Stan Painter, the president of the federal meat and poultry inspectors union, said his poultry inspectors reported weekly about coughing, sneezing, tight throats and itchy eyes that clear up only on the weekends when they are not working. However, “based on science” standards only protect traded goods, not the workers who produce them.

An NCC press release repudiated the Post’s conclusion that the faster line speeds, up to 175 carcasses per minute, which the NCC has petitioned for in a new USDA rule, would mean more use of the rinse. The new rule would expand the use the HACCP (Hazard Analysis Critical Control Point) Inspection Models Project (HIMP), in which only food processing plant employees physical inspect the poultry, while federal inspectors inspect the plant’s HACCP paperwork. Former USDA undersecretary Richard Raymond points to Research Triangle Institute studies of poultry plant data that ascribe reduction in fecal contamination of chicken to HIMP. Dr. Raymond charges that the only reason that HIMP has not been adopted in all U.S. poultry plants is the loss of federal poultry inspector jobs.

Food and Water Watch’s Tony Corbo responded to Dr. Raymond that “HIMP does not work” to improve food safety and that the Public Health Information System developed under Dr. Raymond’s supervision is an $82 million “boondoggle.” Corbo said that to reduce pathogens in meat and poultry, the Food Safety Inspection Service “needs regulatory authority to enforce its pathogen reduction standards,” rather than turning over inspection to the meat and poultry industry. USDA undersecretary for food safety Elizabeth Hagen has indicated that USDA may expand HIMP to pork and beef processing.

In May, the USDA’s Office of the Inspector General reported the results of its audit of 30 hog slaughtering facilities, including five that were in a HIMP pilot project. The headline conclusion: “The Food Safety Inspection Service’s (FSIS) enforcement policies do not deter swine slaughter plants from becoming repeat violators of the Federal Meat Inspection Act (FMIA). As a result, plants have repeatedly violated the same regulations with little or no consequence.” (For more on this report, see the resource note below.)

As the Monitor reported in 2009, the U.S. initiated a World Trade Organization dispute against the European Union, which refused to allow the poultry imports sprayed with a chlorine rinse that enabled production line speeds of up to 140 carcasses per minute. The dispute has not advanced, as there is no agreement on a Codex Alimentarius standard on the safety of the rinse components, including peracetic acid, an ingredient in the spray used in the plant in which Navarro worked. The WTO assumes that Codex standards are authoritative for the purpose of enabling international trade, even if the standards are not implemented in WTO member country legislation.

In 2008, the Monitor reported that the NCC preferred to resolve the poultry rinse trade dispute through negotiations in the Transatlantic Economic Council, rather than through the WTO. It seems likely that the U.S. will try to cut a TTIP deal to export U.S. chicken to Europe, rather than go through a WTO trade dispute, which will require establishing a Codex standard for a poultry rinse ingredient associated with federal poultry inspector health problems and now a death.

(For a mini-history of the post-World War II poultry industry see, IATP’s “How the Chicken of Tomorrow Became the Chicken of the World.” Former IATP Board member and USDA official Rod Leonard was a co-plaintiff in a lawsuit that resulted in a U.S. appeals court in 2001 declaring that HIMP violated the U.S. Meat and Poultry Inspection Act. The appeals court instructed the USDA to change the implementation of HIMP to comply with the law.)

Agribusiness and food processing groups, anxious to increase export and import sales, are proposing various ways to circumvent what they and the Office of the U.S. Trade Representative (USTR) characterize as barriers to trade “not based on science.” For example, the acting Trade Representative, Ambassador Demetrios Marantis, presenting the USTR’s 2013 Report on Sanitary and Phytosanitary Measures in early April, stated, “there is a disturbingly common failure by some U.S. trading partners to base their SPS measures on science.”

Industry and USTR proposals for in the Trans Pacific Partnership (TPP) and the Transatlantic Trade and Investment Partnership (TTIP) negotiations give some insight into their ideas for “going beyond” the World Trade Organization SPS agreement and the standards setting process of the Codex Alimentarius Commission. An industry groups’ letter in March to the USTR recommended the TPP as an “excellent model” for the TTIP negotiations set to begin June 17–18. The letter accuses European Union member states of “unjustifiable restrictions on production methods,” “costly and ever changing political and regulatory barriers to agricultural biotechnology” exports and “arbitrary sustainability requirements on the production of feedstocks” for biofuels.

What is so “excellent” about the TTP negotiations on SPS issues that the industry wishes to apply it to the TTIP negotiations? One industry proposal that the USTR has floated, without tabling a formal text, is for a TPP Rapid Response Mechanism to decide SPS disputes in a matter of weeks, rather than the years normally required for the resolution of a formal WTO trade dispute settlement. Furthermore, a Canadian TPP proposal would require all TPP members to accept provisional standards for pesticide Maximum Residue Levels, even in the absence of agreed Codex MRLs.

Provisional pesticide MRLs are established by the U.S. Environmental Protection Agency without full risk assessments of pesticides. Provisional permits to sell pesticides can last for years, so if Codex members could not agree on a pesticide MRL of interest to industry, the TPP standard could be binding for TPP members for an indefinite future. The Canadian proposal would require that provisional standards must be set by TPP members with “robust” regulatory regimes. If the Canadian proposal becomes part of the TPP SPS chapter, it is likely that provisional SPS standards set by the United States, Canada, Australia, New Zealand and Japan would become binding on other TPP members.

Despite 20 years of USTR and agribusiness criticism of EU agricultural biotechnology rules, the U.S. and EU biotech industry are seeking to minimize the breadth of disagreement with the EU on SPS issues in the TTIP negotiations. Rather than challenge EU biotech laws directly, the U.S. will seek to accelerate EU member country adoption of European Food Safety Authority (ESFA) risk assessments based on a review of industry provided biotech test data. EFSA has determined thus far that event GMO “events” in crops pose no greater risks than the risks of their “conventional counterparts.”

However, even this tactic seems headed for controversy because of the U.S. and EU government difference in understanding what “based on science” means. For example, when EFSA posted on its web site studies in support of the application to commercialize Monsanto’s NK603 transgenic corn, Monsanto requested that EFSA take down the studies from the web site. Monsanto denied rumors that it had threatened to sue EFSA if the studies “based on science” remain available for public review.

EFSA is apparently unaware that data to support U.S. biotech commercialization is neither fully scientific nor available for public review. Under U.S. regulations, biotech companies are not required to submit studies to demonstrate the safety of their products. The companies voluntarily submit only summaries of data vetted by company risk managers and without the methodological explanations of the studies that permit the peer review that is characteristic of scientific method. EFSA’s posting of the Monsanto submissions in support of the NK603 “event” violated the Confidential Business Information provision of U.S. law used universally in biotech company commercialization applications. Monsanto is seeking an “amicable solution” with EFSA.