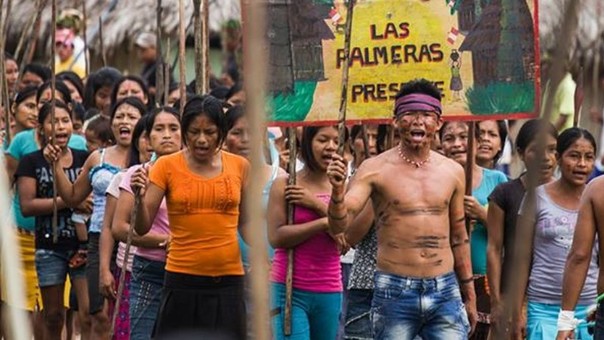 According to autopsy reports, the police killed in the massacre died from gunshots. Witnesses say Indigenous protesters were only armed with spears.

Dozens of Indigenous people in Peru have been absolved Thursday of accusations that they were responsible for a massacre seven years ago, known as the “Baguazo,” that killed at least 32 people, including several police, during an intense conflict as the military cracked down on protesters fighting to block oil drilling in the Amazon rain forest.

After four years of trial, the criminal court of Bagua stated that the people accused of blocking the roads were absolved "because the defense of the environment" was a "superior purpose," according to the CNDDH, a collective of 78 human rights groups in Peru.

The court also threw out the prosecutors’ allegations that the people accused of homicide were carrying guns, as the medical experts had found, and that they were the direct authors of the homicides.

The 53 accused in the Baguazo were mostly Indigenous people, including a dozen facing life sentences. But critics of the investigation into the case argued that the 53 defendants charged have been politically persecuted, while the masterminds behind the fatal violence have evaded justice.

Confrontations broke out on the Amazonian highway known as the Devil’s Curve near Bagua, 600 miles north of Lima, on June 5, 2009. More than 2,000 Indigenous people had rallied to block in attempts to cut off access to the Amazon jungle for oil and gas companies. The year was marked by months of heated protests as Indigenous people and other activists rose up to push back against the launch of Peru’s free trade agreements with the U.S. and Canada, rejecting the provisions of the deal that opened up Amazon resources to foreign exploitation.

As civil disobedience escalated, then-President Alan Garcia declared a state of emergency in 2009 and deployed the military to stamp out the massive protests rocking the country in the name of protecting the Amazon, one of the most biodiverse areas of the planet.

The standoff at the Devil’s Curve was grossly unequal. Survivors described police opening fire with a “rain of bullets” and claimed that security forces also shot at them with helicopters from overhead. The government, quick to attempt to cover up the deadly conflict, claimed that protesters had shot first and police responded in self-defense.

Autopsies showed that the police were killed by gunfire. But witnesses report that the Indigenous people were only armed with sticks and spears, while state security forces were equipped with a full artillery of tear gas, military grade weapons, and helicopters.

According to defense lawyer Juan Jose Quispe, at Thursday’s sentencing hearing—where the court read out a nearly 400-page document related to the case and specific sentences—failed to acknowledge the kinds of weapons that state security agents used against protesters at the Devil’s Curve.

In the massacre, at least 32 people, including several police officers, were killed, though reports of the death toll vary widely. Rumors also emerged after that security agents may have dumped Indigenous people killed into mass graves to lower reports of the civilian body count.

Indigenous communities blamed President Garcia for the massacre due to his militarized response to the protests. According to WikiLeaks cables released in 2014, the U.S. was also complicit and has pressured the Peruvian government to forcefully crack down on protests. In a June 1, 2009 cable, then-Ambassador Michael McKinley slammed the Garcia administration’s “reluctance to use force to clear roads and blockades.” Just four days later, the Baguazo massacre erupted.

Surviving police officers testified that the attackers who opened fire on them were hooded with painted faces. They did not recognize any of the 53 accused as the assailants.

Indigenous defendants were required to give statements without an Awajun or Wampis interpreters and without a legal representative of their choice, according to their attorney, Quispe. The preamble of the report was also delivered in Spanish, and only the sentences were read in Indigenous languages, a decision Quispe slammed as “absurd” since the accused would not be able to understand the reasons for their sentences.

According to Quispe, medical checkups uncovering various injured have suggested that authorities mistreated the accused while in custody.

The 2016 film “When Two Worlds Collide” tells the story of the intense conflict over protection of the Amazon’s pristine environment and natural resources in the face of corporate exploitation, including the events of the Baguazo massacre.