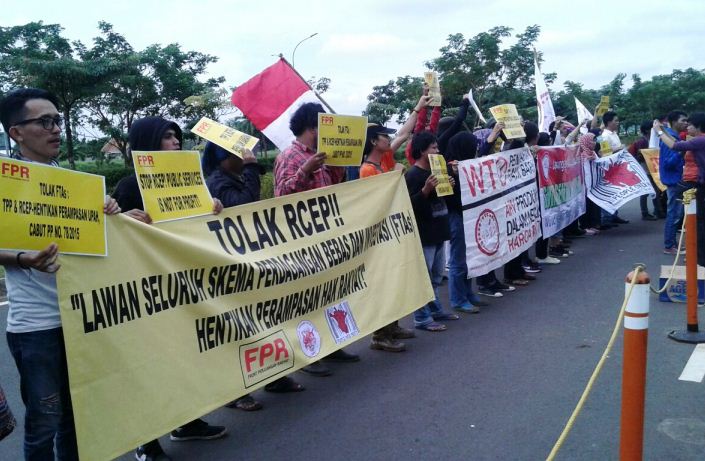 Indonesia for Global Justice (IGJ) urges the government not to be harsh in opening the digital economy sector, especially e-commerce, in the ASEAN Regional Comprehensive Economic Partnership (RCEP) that’s held this week in Incheon, South Korea. The regulations in RCEP is considered supporting monopoly of multinational companies behind the global e-commerce agenda.

IGJ delivered the statement after they held a discussion with a theme of "Multinational Monopoly Behind the Global e-Commerce Agency: Indonesia’s Position in Negotiation?", as a part of the 2017 Indonesian Internet Governance Forum National Dialogue (ID-IGF) event held in Kemayoran, Jakarta Utara, Friday (27/10). The discussion presented Bhima Yudhistira (expert on economy from INDEF), Margiyono Darsasumarja (Commissioner of Telkom), and I Nyoman Adhiarna (Communications and Informatics Ministry Official).

"Our e-commerce market is great, but the percentage of domination by local entrepreneurs is still small. On top of that, marketplaces are still dominated by imported products rather than local products. Therefore, the accumulation of benefits mustn’t be only dominated by big foreign entrepreneurs, especially technology pilot company investors," Rachmi explained.

In the discussion, the spokesperson explained how multinational corporations monopolize the digital economy. The shares of e-commerce in Indonesia is still under 2%, the ratio of entrepreneurship is also low, which is 30%.

The accumulation of benefits from non-cash activities is still dominated by entrepreneurs in the financial sector, one of them is banking. The issue will cause greater disparity, where real economy sector depreciates and the financial service sector grows quite big. On top of that, transactions are mostly completed abroad so it’s difficult to calculate the profits earned by the state from e-commerce transactions.

Regarding issues spoken in the discussion, such as the elimination of customs duties, consumer protection, cross-border data flow, data localization, non-discrimination on digital products, intellectual property rights protection, a spokesperson from the Communications and Informatics Ministry explained that the gap of issues with economy partner countries is very wide. Some regulations in the agreement can be indicated of representing big players in the digital economy sector instead of supporting small players in Indonesia, where most of them are just merchants.

As an additional information, the 20th ASEAN RCEP discussion was held in South Korea. Some issues that are being discussed are Trade in Goods, Trade in Services, Investment, Intellectual Property, and Electronic Commerce (E-Commerce).