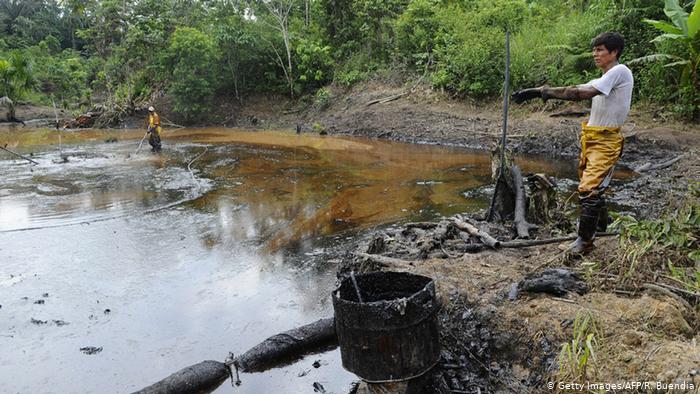 QUITO (Reuters) - Ecuador’s highest court upheld a verdict that U.S. oil company Chevron Corp (CVX.N) is responsible for pollution in an Amazon rainforest, but halved the fine imposed in a previous trial to $9.5 billion, a decision the company dismissed as illegitimate.

Chevron took the case to the National Court of Justice after a lower court deemed in 2011 that Chevron was responsible for pollution caused by U.S. oil company Texaco, which operated there between 1964 and 1992, and whose assets Chevron bought in 2001.

The judge in the 2011 ruling ordered the company to pay $9.5 billion plus an additional $9.5 billion for refusing to publicly apologize for the pollution.

The National Court of Justice on Tuesday determined there had been no legal basis to sanction Chevron for not apologizing.

Villagers in the Lago Agrio region say the pollution has harmed their health. Chevron counters that Texaco cleaned up the area before handing it over to Ecuador’s state oil company, Petroecuador, which Chevron says bears responsibility.

Chevron spokesman James Craig said the decision against the company, confirmed by the National Court of Justice late on Tuesday, was “illegitimate and inapplicable.”

The company’s New York-traded shares were down just a fraction at $119.58 in afternoon trading.

“The only decision that the Court of Justice could have taken ... was to declare the trial null and void and leave this illegitimate sentence without effect,” he said in a statement on Wednesday.

Chevron says the original verdict against it in Ecuador was obtained fraudulently and it is pursuing a case in New York against the U.S. lawyer representing the plaintiffs who it says resorted to corruption to obtain the ruling.

A former Ecuadorian judge, Alberto Guerra, testified in that trial last month that lawyer Steven Donziger bribed him to ghost-write rulings for another judge giving financial compensation to the villagers.

The 200-page verdict said no fraud had been proven nor any procedural flaw in the original trial.

Chevron is fighting its case in various international tribunals to nullify the verdict and multi-billion dollar fine. In a further statement on Wednesday, it said it was reviewing the Ecuadorian court’s decision before deciding how to proceed.

Pablo Fajardo, the lawyer now representing the plaintiffs, said he was encouraged by the latest decision as they pursue legal action against Chevron in five other countries where the company has assets, including Canada, Brazil and Argentina.