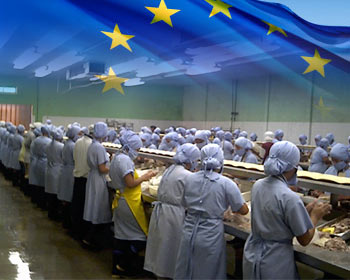 Tuna is a product with exporting significance for Ecuador, the industry says. (Photo: Stock File/FIS)

The Ecuadorian government will try to reach a new trade agreement with the European Union (EU), since in 2013 the benefits the country receives for the Generalised System of Preferences (GSP Plus) will expire.

After the business meetings were cancelled in January this year, a delegation headed by councilor Ricardo Patiño and the Coordinating Minister for Production, Santiago León, will try to resume negotiations in Brussels with representatives of the European bloc.

One of the goals of the Ecuadorian delegation is to once more join the Multiparty Trade Association Agreement with the EU, which the country left three years ago due to disagreements.

While Ecuador’s proposal is to negotiate a Trade Agreement for Development, Brussels’ idea is a Free Trade Agreement (FTA) as the one signed by the European bloc with Colombia and Peru, which Ecuadorian President Rafael Correa opposes.

However, Manuel Chiriboga, head of the Foreign Trade Centre, believes the country needs to make efforts for the EU to include them in the agreement with Colombia and Peru, and "without expecting a different one to be signed because the country has already lost the opportunity to influence the format when it abandoned the negotiations," he told the newspaper La Hora.

Chiriboga explained the multiparty agreement is broader, including trade issues such as copyright, public procurement, among others. Meanwhile, the development agreement is only limited to the business aspect and takes into account differences among the countries to define the benefits.

The one the EU is interested in is the Partnership Agreement so he said that "Ecuador should make a proposal within the format that the EU has with other countries because otherwise it will not get anything, the possibility of negotiating in another way is completely ruled out."

The EU market accounts for about 30 per cent of the non-oil exports of the country and Ecuador obtains significant benefits with the GSP plus, a duty-free scheme for around 7,000 thousand items.

This benefit extends until 31 December, 2013. However, from 2014, Ecuador will be out as it has exceeded the income that the EU considers to assist developing countries and besides, because most Latin American countries have already reached trade agreements.

According to a study by the Ecuadorian Federation of Exporters, the impact experienced after losing tariff preferences with this bloc will reach USD 2,276 million for loss and diversion of trade in the first three years.

Felipe Ribadeneira, chief executive of the Federation of Exporters of Ecuador (Fedexpor), noted that "the banana [from Ecuador] is recognized as the best of its type, which is also true for other products such as tuna and flowers," therefore he considers it essential that the negotiations become successful, reported El Telégrafo.

José Antonio Camposano, president of the Chamber of Aquaculture, is also optimistic about the tour Leon and Patiño are going on, since 50 per cent of exports of its members are destined to the EU.

In 2011, Ecuador exported frozen shrimp to the European market, with a value added for almost USD 735 million, shipments for which fees between USD 18 and USD 20 million had to be paid.

"For the industry, an agreement with the EU implies the possibility of entering not with 3.6 per cent tariff but with 0 per cent. If what was signed by Colombia and Peru is reviewed, they have 0 per cent in the delivery of frozen shrimp and with value-added. Our goal would be that," Camposano pointed out.

On 26 January, the political advisor of the European delegation in Quito, Mauro Mariani, announced that negotiations with the country were temporarily cancelled due to Ecuador’s interest in joining the Mercosur group, which Brussels has been negotiating a trade agreement with since 2000.