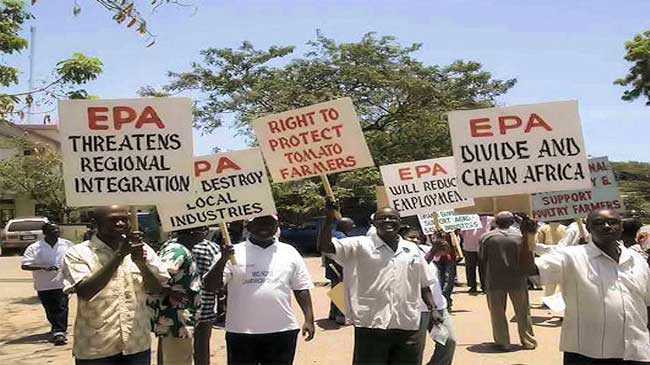 The Economic Justice Network of Ghana (EJN), unequivocally condemns, the decision of the West African leaders to approve the signing of the Economic Partnership Agreement (EPA) with the European Union. This decision ], taken at 45th Ordinary Session of the ECOWAS Authority of Heads of State and Government on July 10 2014 in Accra, runs counter to the long standing views and positions expressed by several groups of stake-holders and ordinary citizens and corroborated by institutions of high repute such as the United Nations and the African Union. Faith-based organisations, trade unions, farmer-based organizations, women groups and private sector players have repeatedly demonstrated over the years that the EPA are against the fundamental developmental needs and imperatives of the economies of West Africa.

Judging by the terms and provisions in the text approved by the Heads of State, EPA will lead to the collapse of the domestic manufacturing and other productive sectors due to undue pressure from the subsidized goods from Europe and loss of revenue from trade taxes. The agreement also commits the Sub-region to have developed, within 6 months of its adoption, a road map and modalities for an agenda of further liberalisation and deregulation of a whole range of areas – such as Services, Investment, Government Procurement, Intellectual Property and even other areas that have never been part of the EPA negotiating agenda, such as Capital Accounts, none of which are required by any international rule or obligation undertaken by the government.

The cumulative effect of all these will be to take away ability of West African governments to deploy the range of policy instruments that are critically needed for development in our Region.

Furthermore the agreement subjects the dynamics of West Africa’s internal regional trade and development, as well as its relationship with the other regions of Africa and the South to the imperatives of its dealing with the European Union. It is sad for the West African leader to make mockery of our own regional integration agenda by this decision.

All these negative consequences inflicted on West Africa are in return for a paltry aid promised by the European Union, as well as an attempt to save a few groups of exporters, when indeed credible alternatives exist which could have addressed the concerns and needs of all stake-holders.

This agreement cannot be accepted by the ordinary men and women of this country who struggle daily in the midst of the precarious economic situation. Citizens should call upon their elected representatives in Parliament to demonstrate due leadership when this inimical agreement is presented to Parliament for ratification.

Issued by the Economic Justice Network, Ghana on 11th July 2014