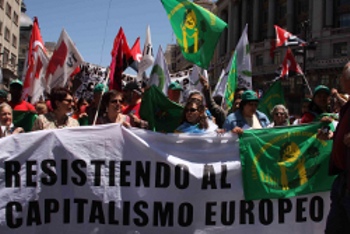 Central American countries and the European Union have reached a free trade agreement in talks in the Spanish capital, an EU official told AFP on Tuesday.

A Central American delegate earlier said there was an agreement in principle and "we are in the final details," putting them down on paper.

"I am sure the deal is going to be closed ... in the next few hours," he said, adding that both sides had taken a flexible position.

A little earlier, El Salvador television carried comments from the Salvadorean chief of cabinet Alexander Segovia, in Madrid, who said that talks had closed successfully.

"There was a show of flexibility by the European Union and with that we managed to get to an agreement," he said.

In Nicaragua meanwhile, Nicaraguan President Daniel Ortega said that they had reached a basic agreement with the EU.

Six Central American countries, Costa Rica, El Salvador, Guatemala, Honduras, Nicaragua and Panama have been in talks with the European Union over an agreement that would include a free trade deal.

It would be the first of its kind between the 27-nation bloc and Central America.