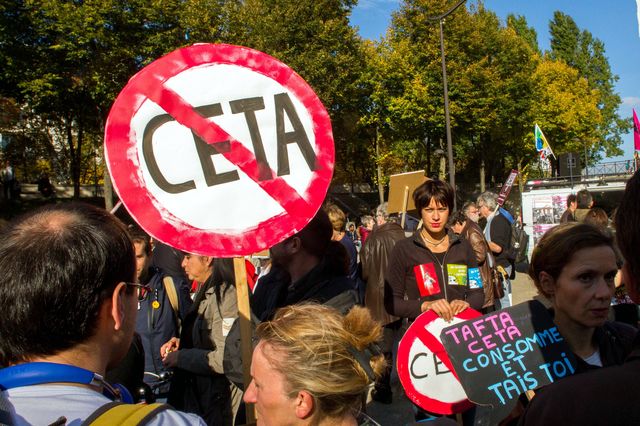 After seven years of negotiations, and a bumpy final landing, the European Union and Canada signed a landmark trade deal on Sunday (30 October).

“CETA is the best trade agreement the European Commission has ever negotiated,” said President Jean-Claude Juncker speaking to the press after the signature, adding it will set global standards for other trade agreements.

Outside the EU’s headquarters where the signing took place, some 100 anti-globalisation protesters clashed with police trying to break down barriers and threw red paint at the building. They banged drums and chanted anti-CETA slogans.

“We need to explain better the real effects of free trade. Protectionism means a return to national egoisms, and threat of violent conflict,” said Tusk, adding that free trade and globalisation have protected humanity from poverty, hunger and total conflict.

Those opposing the deal see it as a rehearsal for an even bigger and more controversial agreement between the EU and the United States (TTIP).

European Parliament President Martin Schulz said, “It is not by isolating ourselves that we will defend ourselves from globalisation. It is by engaging and shaping the current trade system.”

“The EU is not turning its back to the world. It is more committed than ever to working with tis partners to defend its values and created opportunities for tis citizens and enterprises,” he added.

Formally known as the Comprehensive Economic and Trade Agreement (CETA), the deal removes 99% of tariffs and has the potential, backers say, to boost bilateral trade by 20%, linking the single EU market of 500 million people with the world’s 10th largest economy and a member of the G7 club of industrialised powers.

The European Commission reckons that Canada will eliminate duties worth €400 million for goods originating in the EU, as of the first day of its implementation, and the figure is supposed to rise to more than €500 million after the transitional period.

Service companies could also benefit, and for the first time EU companies would be able to tender for public contracts at Canadian provincial and municipal level.

In the last two weeks, as all other member states pledged their support for the deal, Belgium had to face the no-go of Wallonia, a formerly wealthy industrialised region that is now grappling with the restructuring of its economy.

Wallonia demanded reassurance and guarantees on agriculture, and won concessions that international investors will not be able to force governments to change.

The lifting of the Walloon veto cleared the way for the EU-28 bloc to sign the treaty, allowing it to come into force, but only on a temporary basis, starting next year.

The deal can indeed be applied provisionally once the European Parliament also ratifies it in December. But for it to be fully put in place, it will have to be ratified by the EU’s 38 national and regional parliaments.

Provisional implementation will include all aspects of the deal related to trade, whereas the investment chapter, and a controversial court to settle investment disputes between states and companies, would only come into force with full implementation.

A deal for the middle class

Canada has aggressively pursued the trade pact with the EU in a bid to boost its tepid outlook for growth at a time when its economy has been hit hard by the commodity-price slump.

America’s northern neighbour has experienced a decline in manufacturing jobs, stagnant income for most of its citizens and rising inequality. Concerned by a shrinking middle class, Trudeau made it its number one priority. He raised taxes on the top 1% of incomes to help pay for a middle-class tax cut.

After Belgian regional parliaments gave the green light to sign CETA on Thursday (27 October), the Canadian premier tweeted the agreement would lift the economy and grow the middle class.

The bilateral deal also paves the way for Bulgaria and Romania to obtain visa-free travel. Canada had a visa-free regime with all EU countries except Romania and Bulgaria until now.

Template for the UK?

The CETA deal is seen by some as a good basis for a post-Brexit deal with the UK. CETA will give Canada preferential access to the EU single market without all the obligations.