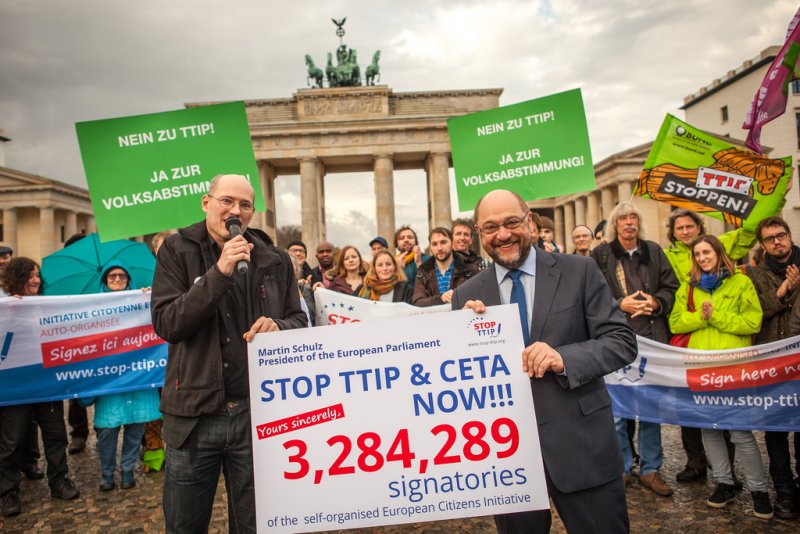 The General Court of the European Union passed a ruling in support of public initiatives critical of EU legislation. The court said that movements like "Stop TTIP" could contribute to public debates on pressing issues.

The ruling in the case of the citizens’ initiative "Stop TTIP" on Wednesday effectively annulled a previous decision made by the commission several years ago. In 2014, the EU’s executive arm blocked the registration of the citizens movements, which aim to prevent the conclusion of two major trade agreements between the EU and the US (TTIP) and with Canada (CETA).

The bloc’s lower court ruled that "nothing justifies excluding legal acts from democratic debate" by "Stop TTIP" and added that the commission had been wrong to reject the initiative and its efforts as something outside the scope of citizens.

The EU had argued in 2014 that it could not allow any initiative to register that was opposed to legal proceedings already underway.

The ruling may now set a precedent for other movements that have previously been struck down by the EU Commission. Other organizations like the anti-globalization group Attac and the German environmental movement BUND have welcomed the decision.

Any initiative that collects 1 million signatures can have its case heard and discussed by the EU. But only if they are registered with the EU Commission beforehand.

"Stop TTIP" had planned to collect the required number of signatures from EU citizens to force the EU Commission into issuing an official response to their concerns regarding how the deal would affect, among other things, the environment and data protection. However, the 2014 ruling had hindered the movement from registering in the first place, blocking it from fulfilling the petition requirement.

The EU’s trade deal with Canada, known as CETA, was successfully finalized last year and can enter into full force after ratification from the national parliaments of EU member states.

TTIP was put on hold with the election of US President Donald Trump, who has been critical of broad multilateral trade pacts.