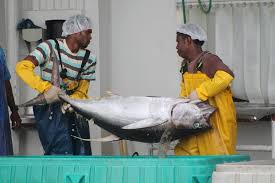 Brussels negotiations to boil down to fishery, market access, trade in services

When Pacific trade negotiators sit down later this month with their European Commission counterparts to carve out the finer details of their Economic Partnership Agreement (EPA), the pressure points would be fishery, market access and services.

That is the word from the EU Ambassador for the Pacific, based in Suva, Andrew Jacobs. Invited to address the trade ministers and officials of the Pacific ACP group in Nadi last month, Ambassador Jacobs accused the Pacific region of being too “inflexible” in negotiations over fishing access. “The EU also doubts the fish conservation measures advocated by the Western and Central Pacific Fisheries Commission in the form of Vessel Day Scheme. “Because of this, the EU will be unable to provide fresh proposals on fresh and frozen fish. “Realistically, the political opposition to global sourcing which the EU faces domestically obliges the EU to consider a clause where the product coverage will be much narrower than the current clause in the current EPA. “In addition, the potential development impacts of global sourcing for fresh and frozen fish for smaller islands still remain questionable.”

This assertion has been supported by a recent study, said Ambassador Jacobs, that showed global sourcing is only one of the many factors that determine the Pacific Islands’ ability to export fish products to Europe. The economic environment, infrastructure constraints, health and sanitation compliance and illegal, unregulated and unreported fishing legislation are equally important factors. PACP’s response to claims made by the Ambassador was frank and swift, giving a glimpse of how the negotiations will look like in Brussels later this month.

Fiji’s Permanent Secretary for Trade and Industry Shaheen Ali told ISLANDS BUSINESS that the Pacific ACP could also cite studies that showed global sourcing was the way to go for Pacific islands countries. Tuiloma Neroni Slade, Secretary-General of Pacific Islands Forum Secretariat, also rejected the EU’s claims of inflexibility. “You will find that first of all we are in a process of negotiation with the Europeans and you will find that on the side of the Pacific islands countries, we can with absolute justification make exactly the same assertion and we can point to facts to support such an assertion from our side,” Tuiloma said at a press conference held at the end of the Pacific ACP Trade Ministers in Nadi. “We made almost extraordinary efforts on market access offer for example. These things are not simply drawn out of the drawer. “These things require a great deal of hard work, national consultations and other necessary data collection and contacting communities. “We were able to put this together for all Pacific Islands countries in good time given the circumstances. “All these offers have been conveyed to the other side (EU) and today, we are still awaiting responses.”

Tuiloma was, however, not asked to respond to the senior EU diplomat’s position that Pacific ACP countries would need to establish national competence authorities for each islands states that would oversee health and sanitation issues of fish exports. In demanding this, the EU is indicating that it rejects the position of the PACP that Europe considers a regional competence authority.

Ambassador Jacobs also warned the islands that the global sourcing concession offered under its interim EPA with PNG, does not mean the same concession would remain in a comprehensive EPA. “Global sourcing led to a significant controversy during the ratification of the interim EPA in the European Parliament. “It is by no means certain that the European parliament will accept or extend the clause in the permanent EPA. “One concern raised is the possible impact of global sourcing on resource management. “This is one of the reasons why we have to be certain that effective conservation and management measures for fishery are in place in the region before we conclude a new EPA. “The items outstanding in the fishery chapter are not only numerous but have political poignancy that goes beyond EPA negotiations. “For this reason, the conclusion of the negotiation in the next round of negotiations in early July is simply not realistic. “More time is needed at the technical level to narrow considerable gaps and positions. “Any bracketed texts would further require more political will for the heavy lifting required to bridge the gaps.”

Market access is also going to be a fiery point in the EPA negotiations in Brussels. Ambassador Jacobs seemed to think so too. He did clarify that in amending the market access regulation in April 2011, the European Parliament did not in the process set a deadline on when the comprehensive EPA negotiations should be completed. This EU position contradicts the Pacific ACP Leaders’ decision to set December 2013 as the deadline for EPA negotiations. Fiji, in particular, wants negotiations to be wrapped up by October 2013.

The host of the PACP trade ministers’ talks in Nadi, Fiji’s Attorney-General Aiyaz Sayed-Khaiyum, who is also the trade minister, does not buy the view that in insisting that there’s no deadline on EPA negotiations, the EU is trying to apply extra pressure on Fiji to ratify the interim EPA it signed with Brussels in December 2007. PNG, which signed an IEPA with the EU like Fiji, has since done ratification and is now exporting tuna products duty and quota free to the European market. Fiji has made it known that it would not ratify its IEPA since it is not happy with some of the concessions offered by Europe.

Meeting documents sighted by this magazine did indicate that Pacific ACP trade officials recognised that the amended market access regulation of the EU have added additional pressure on the negotiations. There are even some delegates who carry the belief that in insisting for a deadline-free trade negotiation, the EU appears to be hoping that the seemingly united front of the Pacific ACP states would collapse. One senior islands official suggested to this magazine that Brussels appears to show no appetite for an early conclusion of negotiations for a comprehensive EPA. The aide said it is way too late for Brussels to be asking that trade in services should be included in EPA negotiations now. This will only prolong the talks and no conclusion would be in sight soon, the senior official lamented.

“The EU is more than willing to discuss services in negotiations of a comprehensive EPA and to include a services chapter in the negotiations,” Ambassador Jacobs told the Pacific trade ministers and officials. “We are not ready to conclude an agreement which essentially covers trade in goods and only then negotiate trade in services in parallel with the ratification of trade in goods agreement. “This would imply that we go through the ratification process twice, an administrative burden we don’t want to take on. “Brussels is ready to include services in negotiations but it needs to get a clarification on what the expectations of the Pacific states are, in particular, labour mobility.”