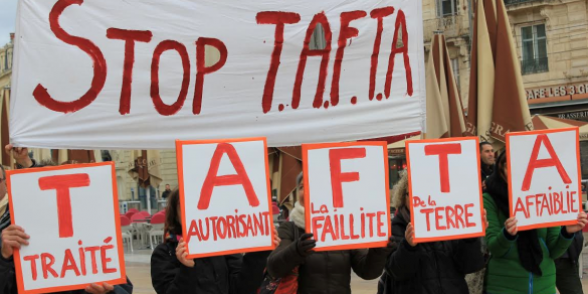 The European Parliament on Thursday failed to back trade talks between the EU and the US as President Donald Trump warned of severe consequences if Europe failed to deliver.

Pursuing a limited trade deal was the central part of a truce agreed in July when Trump and European Commission President Jean-Claude Juncker pledged no new tariffs following those on steel and aluminium.

That announcement allowed the two sides to reduce tensions at a time when Trump threatened to impose steep duties on European automobiles — a threat he has renewed in recent weeks.

MEPs meeting in the eastern French city of Strasbourg on Thursday failed to pass an approval of an EU mandate, after a rebellion by lawmakers changed the wording of the text.

In the final tally, 223 voted against the recommendation to start the talks and 198 in favour, with 37 abstentions.

"If they don’t talk to us we’ll do something that will be severe economically. We’ll tariff a lot of their products coming in," Trump told reporters at the White House.

It was not clear whether Trump was responding specifically to the vote in the European Parliament, which only has an advisory role with regard to the EU’s negotiating mandate, but will have the final say once an agreement has been concluded.

"We have taken note of the vote, on the draft EU-US negotiating directives. We await the outcome of the discussions in Council," a spokesman for the European Commission, the EU executive, said.

"The Commission will of course involve the European Parliament throughout in this process," he added.

The European Council represents member states and will decide on the mandate, with France and Germany very divided on the matter.

Berlin strongly wants the deal in order to placate Trump and avoid US auto tariffs that would punish Germany’s cherished exports, a prospect Chancellor Angela Merkel has labelled "frightening".

France however is dragging its feet, fearing that entering trade negotiations with Trump could fire up domestic opposition just months ahead of European elections, set for May 22 to 26.

’Unity is our strength’ -

The European Commission is hoping to obtain a mandate this month from the from the member states to begin negotiating a trade deal limited to industrial goods.

The setback in parliament comes as debate over the contours of the deal showed transatlantic divisions remained deep, with the US insisting that farming be included — an idea rejected by the EU.

Moreover, the punishing tariffs by the US on steel and aluminium imports remain in force against Europe.

"I’m fully aware that some of you are afraid we are negotiating under threat," EU Trade Commissioner Cecilia Malmstrom told MEPs ahead of the failed vote.

"I sincerely hope you will support the negotiation with us. Unity is our strength," she said.